India’s major cities have been put on high alert after two explosions killed at least 16 people and injured more than 100 others in the southern city of Hyderabad, officials say.

Investigators hunted on Friday for perpetrators of the twin bomb attacks near a cinema and a bus stand in a busy neighbourhood of Hyderabad, which has seen several disturbances in the recent past.

Local media reported that security cameras were not working in recent days, and Indian intelligence agencies gave warning several days ago that there might be an attack in the area.

V Dinesh Reddy, the police chief of Andhra Pradesh state, said improvised-explosive devices with nitrogen compound were used in the blasts, which he blamed on a “terrorist network”.

“The authorities are keeping very tight-lipped about who might be to blame, Al Jazeera’s Sohail Rahman, reporting from Hyderabad, said.

They are not pointing anything at the moment, as investigations are under way, he said.

“A lot of assumptions are being made in the local media, but as far as authorities are concerned, they are keeping very tight-lipped, he said.

The bombings, the first to strike India since 2011, hit a mainly Hindu district in Hyderabad, a southern hub of India’s computing industry which has a large Muslim population.

Witnesses said one of the crude devices went off about 15 metres from the entrance to the Venkatadri Cinema in the popular retail district of Dilsukh Nagar.

Manmohan Singh, the Indian prime minister, pledged punishment of those responsible for the “dastardly act”, which came with the nation on alert after the hanging of a separatist earlier this month.

Mohammed Afzal Guru was executed after being convicted of involvement in a 2001 attack on India’s parliament, in which nine policemen were killed.

Many in Indian-administered Kashmir believe Guru did not receive a fair trial, and the secrecy with which the execution was carried out fuelled anger in a region where anti-India sentiment runs deep.

The attacks have raised questions over whether Australia’s cricket team will go ahead with a scheduled international match to be played in the city starting on March 2, although the tourists said the Test was still on for now.

Sushil Kumar Shinde, India’s home minister, who visited the blast site on Friday, said that while authorities had received intelligence of a possible threat of attack, “it was not specific”.

“The investigation has just started … we will find out everything,” he said.

John Kerry, the US secretary of state, said on Twitter that he had expressed his sympathies for the “brave people” of Hyderabad when he met India’s foreign secretary in Washington.

The government has been heavily criticised for its failure to arrest the masterminds behind previous bombings.

The explosions came on the same day as India’s parliament opened for a crucial budget session.

Rajnath Singh, the president of the main opposition BJP, demanded a thorough investigation into the blasts.

His party has also called for a general strike in the state on Friday. 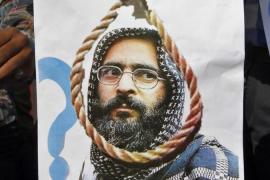 Afzal Guru, sentenced to death for 2001 attack, executed after his mercy plea was rejected by Indian president. 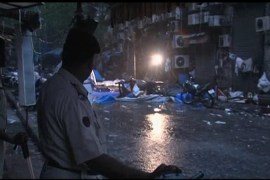 Government’s failure to prevent yet another attack on the commercial capital sparks public anger.