Syrian rebels have captured a military airbase in the north and geared up for a major battle against regime forces as the opposition says it refuses to accept President Bashar al-Assad in talks on the 23-month conflict.

The rebels on Friday said they overran the base in the town of Sfeira, east of Aleppo international airport, and captured a large stockpile of ammunition.

Activists reported intermittent clashes around the Aleppo airport itself as well as around Nayrab airbase and another military complex, as the two sides squared up for a major fight.

The Syrian army “is preparing a large-scale operation to take back control of Base 80”, he said, referring to a military complex tasked with the security of both Nayrab and Aleppo airports.

Rebels seized the base on Wednesday after a battle that left at least 150 dead from both sides, among them senior army officers, according to the Observatory.

On the political front, the opposition Syrian National Coalition said it refused to accept Assad in any talks, as part of an eight-point “framework” it has drawn up for solutions to the conflict.

The group issued the framework after a meeting in Cairo to discuss a proposal by its chief, Mouaz al-Khatib, for peace talks with regime representatives, a move that ruffled feathers in the umbrella opposition group.

“Bashar Assad and security leadership who are responsible for the current destruction of the country are outside the political process and must be held accountable for their crimes,” it said in a statement issued in English.

“Turkey has turned its territory into camps used to house, train, finance and infiltrate armed terrorist groups, chief among them the al-Qaeda network and the al-Nusra Front.”

Also on Friday, the International Committee of the Red Cross (ICRC) said it had stepped up aid operations across the shifting front lines in Syria to bring food and medical assistance to civilians in rebel-held areas.

ICRC aid workers reached opposition-held Houla in Homs province for the second time in two weeks on Thursday, delivering medical supplies with government consent after being shut out for three months.

“I’ve come back from Syria convinced that we must expand operations in coming weeks and months and that we can and must build on our increasing presence in the most delicate regions including those under opposition control,” Pierre Kraehenbuehl, ICRC director of operations, announced in Geneva, Switzerland.

He later told Reuters news agency: “Our priority areas are Idlib and Aleppo in the north, where it is very unstable and fluid. Also the circle around Homs and Hama.”

The ICRC has been aiding some 1.5 million Syrians, via the Syrian Arab Crescent, in a conflict that the UN says has left some 70,000 people dead.

The UN has also said the number of Syrians who have fled the country could hit 1.1 million by June.

Customs officers in Finland, meanwhile, said they had seized spare parts for tanks in a container en route from Russia to Syria on board a Finnish ship docked at Helsinki’s Vuosaari port in January.

The European Union has banned all sales, delivery, transfers and exports of weapons to Syria. 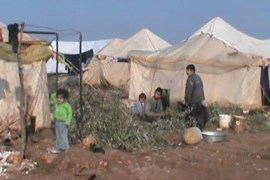 Communities desperate as they are unable to cross into Turkey to seek refuge. 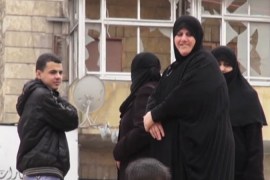 Mouaz al-Khatib wants to hold talks with country’s vice president, but not all Syrians back his initiative. 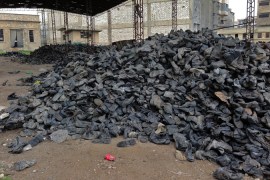 Piles of army boots left by retreating Syrian soldiers come in handy for Aleppo residents to light fires for heating. 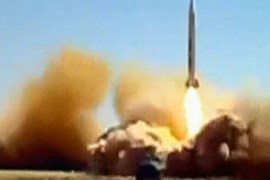