The French and British governments have promised to punish those found responsible for selling horse meat in beef products at the heart of a growing scandal that started in Britain but is quickly spreading to France.

Benoit Hamon, French consumer affairs minister, said on Saturday that an investigation had found that the horse meat had originated in Romania, although there were links with French, Dutch and Cypriot firms and a factory in Luxembourg.

The British unit of frozen foods group Findus began a recall this week of its beef lasagne from retailers on advice from its French supplier, Comigel, over concerns that some packs contained high levels of horse meat.

Findus France said it too had recalled lasagne and two other products after discovering that they included horse meat from Romania rather than beef from France as it had thought.

Hamon said an EU-wide alert had been sent out and that it was not yet clear whether there had been an intentional fraud or the meat had been sold as beef by accident.

“I can assure you that, whether it’s a question of negligence or direct responsibility, there will be sanctions,” Hamon said on iTele television.

Separately, Matthieu Lambeaux, Findus France’s director-general, said in a statement the company would file a legal complaint on Monday.

“We thought we had certified French beef in our products. But in reality, we were supplied with Romanian horsemeat. We have been deceived,” Lambeaux said.

Hamon said a Luxembourg factory had been supplied by the French firm Poujol, which had bought the meat frozen from a Cypriot trader, who in turn sub-contracted the order to a Dutch trader supplied by a Romanian abattoir.

However, Findus’s supplier Comigel, a frozen foods producer based in eastern France, told a newspaper it had bought the meat from another French company, supplied from a Romanian abattoir.

In Britain Findus said it believed the contamination was deliberate.

“The early results from Findus UK’s internal investigation strongly suggests that the horsemeat contamination in beef lasagne was not accidental,” it said.

Paterson summoned Britain’s leading food retailers and representatives of food processors to an emergency meeting at his office in London on Saturday to discuss the crisis.

He said participants were determined to get to the bottom of a scandal which he said was either caused by “gross incompetence or what I suspect is an international criminal conspiracy”.

Britain’s government is under pressure to appear on top of the scandal, which comes less than a month after supermarket chain Tesco and fast food outlet Burger King  found horse meat in beef burgers from an Irish supplier.

Britons generally do not eat horse meat, regarding its consumption as a quirk of French appetites.

However, the meat has also fallen out of favour with consumers in France. 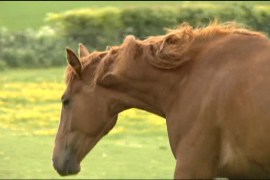 In Britain and Sweden, horse meat is being passed off as beef in burgers as well as frozen products.