Afzal Guru, sentenced to death over his role in a deadly attack on India’s parliament in 2001, has been hanged in Delhi’s Tihar jail after his mercy petition was rejected by Pranab Mukherjee, the Indian president, according to Indian officials.

Guru, a former fruit seller from India-administered Kashmir, was hanged at Tihar Jail at around 7:30am local time (02:00 GMT), becoming only the second person to be hanged in India in nearly a decade, officials said on Saturday.

Confirming the news, RK Singh, Indian home secretary, said after the execution: “This is only about the law taking its course.”

Speaking in the early hours of Saturday, Venu Rajamony, the president’s spokesperson, said. “The mercy plea of Afzal Guru was rejected few days ago.”

Guru was originally given the death sentence in 2004 for his involvement in the 2001 attack that left at least nine people dead, including eight policemen.

Five armed men who stormed parliament in New Delhi on December 13, 2001, were shot dead by the security forces.

Guru was found guilty of conspiring with and sheltering the fighters who attacked the parliament, an incident that brought nuclear-armed India and Pakistan to the brink of war after India blamed its neighbour for the attack.

He was also held guilty of being a member of the banned group Jaish-e-Mohammed, which fights against Indian rule in the divided Himalayan region of Kashmir, where a separatist conflict has claimed up to 100,000 lives.

Guru’s wife filed a mercy petition on Guru’s behalf in 2006.

Major towns in India-administered Kashmir have been placed under curfew since news of Guru’s execution was first broadcast. Barricades were erected and hundreds of police and paramilitary forces deployed.

Al Jazeera’s Divya Gopalan, reporting from New Delhi, said because Guru was an Indian national from Kashmir, “this is a very controversial issue. There will be major reactions to it”.

Politicians have been told not to leave New Delhi for fear of violence, our correspondent said.

Hundreds of protesters on Saturday rallied in Muzaffarabad, the capital of Pakistan-administered Kashmir, to condemn the execution.

The rally was organised by Pasban-e-Hurriyat, an organisation representing Kashmiris who migrated to Pakistani Kashmir from the India-administered part of the disputed Himalayan region.

Meanwhile, the government of Pakistan-administered Kashmir announced three days of mourning across the state to mark Guru’s hanging.

Guru’s conviction, which has been delayed on several occasions, was both highly political and hotly contested.

He described his imprisonment as a “gross miscarriage of justice” in his mercy appeal to the president.

A spokesperson of India’s main opposition Bharatiya Janata Party (BJP), Rajiv Pratap Rudy said on Saturday that despite the delay in the execution, the nation was happy that Guru is hanged.

“The entire opposition, the entire country was hoping that he should be hanged. This action is delayed but undoubtedly
it’s a welcome action,” he said.

A group of activists including lawyers have campaigned for him, saying his trial had major problems, including fabricated evidence presented by the police and the lack of proper legal representation.

Junaid Azim Mattu, president of the Kashmir People’s Conference, told Al Jazeera that the general perception in Kashmir is that the trial was not free.

“Credible legal defence was not made available to Mr Guru and in the context of a media trial, he unfortunately stood convicted in media circles even before the trial begun,” he told Al Jazeera.

Protesters against his “unfair” conviction in Muslim-majority Kashmir have held demonstrations demanding his release, while right-wing Hindu activists have long demanded his execution. 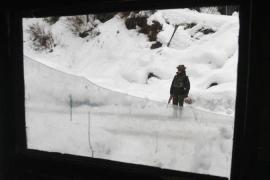 Kashmir: The key to peace

Despite confidence-building measures, can there be lasting accord between India and Pakistan while Kashmir is disputed? 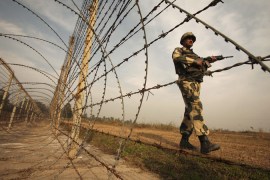 Kashmir: Caught in the middle

Is lasting peace between India and Pakistan possible without resolving the Kashmir dispute?