Mohamed Morsi, the Egyptian president, has sent re-enforcements of the national army to Suez, where nine demonstrators and one soldier died in protests to mark the second anniversary of the uprisings that brought down former president Hosni Mubarak.

“Egypt’s [security] apparatuses will chase the criminals and bring them to justice. They are also doing their best to protect and secure the peaceful demonstrations,” Morsi said on Saturday.

Morsi’s announcement that security forces will search for rioters he said were responsible for violent protests across the country, comes a day after tens of thousands of people took to the streets demanding he step down.

“I’m offering my condolences to all Egyptians, the martyrs in Suez and the policemen who were the victims of ugly violence,” he said.

The protesters have demanded the establishment of an official minimum wage and a suspension of the new constitution, which opponents of the president say was rushed through. Others, want Morsi step down from power.

Al Jazeera’s Sherine Tadros, reporting from Cairo, said that the crowds were shouting “‘ irhal ‘ – leave, leave – in reference to Mohamed Morsi. The feeling here on the street…is the Muslim Brotherhood aren’t interested in making changes to better the lives of people,” said Tadros.

Speaking at the World Economic Forum in Davos, Qandil said “after you have aired out your voice and your statements, please go back to work. Work hard for yourself, for your people, for your family – because that’s the only way to achieve the aspirations of the Egyptian revolution”.

At least ten people were killed on Friday, and 476 others wounded, in the clashes in several cities, a police source told Al Jazeera.

A 14-year-old boy, was among the six killed in Suez, where protesters set ablaze a building that once housed the city’s local government. Another person died in clashes in Ismailia, another Suez Canal city east of Cairo.

The army deployed troops to the port city late on Friday to take over control of the city’s security.

In response to the deaths, Morsi called on Egyptians to reject violence. The president urged “citizens to adhere to the values of the revolution, express opinions freely and peacefully and renounce violence,” said a message posted on his Twitter account .

Demonstrators also stormed the governorate headquarters in the canal city of Ismailiya and attempted to storm two other buildings elsewhere, witnesses said.

Calls for mass street protests against Morsi and the Muslim Brotherhood, from which he hails, were led by the secular-leaning opposition.

Protesters were urged to use the same slogan used during the uprsing in 2011: “Bread, freedom, social justice.”

Mohamed El Baradei, an opposition leader and former head of the UN’s atomic agency, wrote on his Twitter account: “Go out into the squares to finally achieve the objectives of the revolution”. 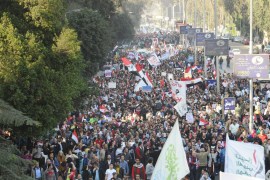 Tens of thousands of people gather in Cairo to mark second anniversary of revolution that overthrew President Mubarak. 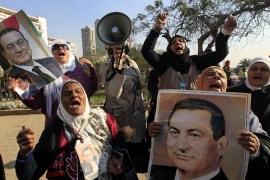 Former president and ex-interior minister to face new trial for complicity in killing of protesters in 2011 uprising. 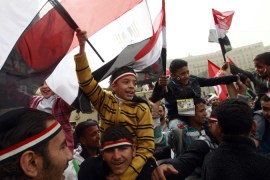 Egypt: A revolution in 18 days