Myanmar troops have attacked rebel positions in northeast Kachin despite a ceasefire order from the president and an invitation to the rebels to take part in peace talks, a rebel spokesman and a local source have said.

President Thein Sein issued the ceasefire order to troops in the La Ja Yang area of Kachin near the border with China, where fighting has been fiercest.

It due to take effect on Saturday morning, but Colonel James Lum Dau, a Thai-based spokesman for the Kachin
Independence Army (KIA), told the Reuters news agency the army had continued to attack over the weekend, both in La Ja Yang and elsewhere in the state.

An offencive in La Ja Yang  on Sunday morning had involved artillery and infantry, he said.

A 17-year ceasefire with the KIA broke down in June 2011 and fighting has been particularly intense in recent weeks.

Twenty months of fighting has displaced tens of thousands of people and, for some analysts, raised doubts about the sincerity of all the political and economic reforms pursued by Thein Sein in Myanmar.

Addressing a development forum attended by donor countries and international aid organisations on Saturday, Thein Sein had invited the Kachin rebels to a “political dialogue” with rebels from other states.

Ten other major rebel groups from various states have already agreed to a ceasefire.

A local source in Kachin, who did not want to be identified, confirmed the army attacks on Sunday, including one on a rebel position about 8km from the KIA stronghold of Laiza.

Fighter jets had flown over the area but had not attacked, the source said.

Loud explosions were also heard by residents of the town of Mai Ja Yang who felt the vibrations, the source said. 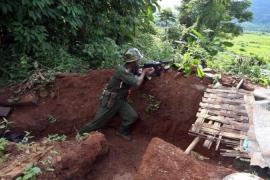 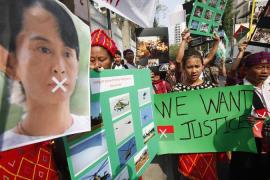 Despite international attention to Myanmar’s reforms, some things have not changed and have in fact worsened. 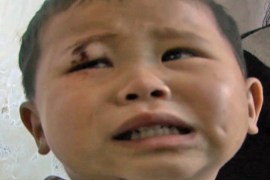 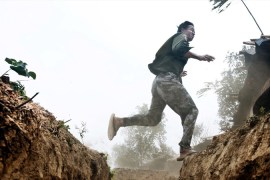 On the front line with Kachin rebels

Fighting rages between Myanmar troops and Kachin Independence Army after a 17-year-long ceasefire was broken a year ago.