The Algerian army has surrounded a natural gas complex where armed fighters are holding a group of foreign workers, after at least two people were killed in a raid near a southern Algerian gas field.

About 20 gunmen are believed to have been behind the attack, which was apparently in retaliation against France’s intervention in Mali.

It did not say how they eluded their captors.

There were also unconfirmed reports that some of the hostages escaped, but it was not clear yet how many.

Al Jazeera spoke to some of the hostages by telephone on Thursday, but it was unclear whether or not they were speaking under duress. More details will be released shortly.

French President Francois Hollande confirmed that there were French nationals among the hostages.

“There were and there are French nationals at this facility,” Hollande told a news conference.

Hollande said that while the situation was very confused, he had total faith in the Algerian authorities’ ability to resolve the crisis and would be speaking to Algerian President Abdelaziz Bouteflika later in the day.

A spokesperson for the “Masked Brigade”, claiming to hold the hostages, said on Wednesday that the operation near the In Amenas field was to punish Algeria for allowing French fight planes to use its airspace in attacking al-Qaeda-linked rebel groups in Mali.

“The operation was in response to the blatant interference by Algeria and the opening of its air space to French aircraft to bomb northern Mali.”

ANI said the fighters demanded an end to French military operations in return for the safety of the hostages.

Statoil, the Norwegian firm that is involved in running the field, held a press conference on Thursday.

Al Jazeera’s Paul Brennan said that the company did not want to give too many details due to the security concerns.

“Employees of Statoil are trained regularly for all kinds of different scenarios, including the possibility of hostage taking,” the company said during the press conference.

The Algerian interior ministry said: “A terrorist group, heavily armed and using three vehicles, launched an attack this Wednesday at 5am against a Sonatrach base in Tigantourine, near In Amenas, about 100km from the Algerian and Libyan border.”

One Briton and an Algerian were killed in the attack, Interior Minister Dahou Ould Kablia said. Seven others were reportedly injured.

William Hague, the British foreign secretary, confirmed the death of a Briton on Thursday, but rejected any link to the crisis in Mali, calling that an excuse for “cold-blooded murder.”

“While sadly I can confirm the death of one British national, I can’t confirm at this point the exact number of hostages held,” he said.

The attack began with the ambush of a bus carrying employees from the gas plant to the nearby airport but the attackers were driven off, according to the Algerian government, which said three vehicles of heavily armed men were involved.

“After their failed attempt, the terrorist group headed to the complex’s living quarters and took a number of workers with foreign nationalities hostage,” the government said.

The interior minister was quoted by official news agency APS as saying: “The Algerian authorities will not respond to the demands of the terrorists and will not negotiate.”

Hundreds of Algerians work at the plant and were taken hostage in the attack, but the state news agency reported that they had gradually been released in small groups, unharmed.

The exact number of hostages could not immediately be confirmed.

An Algerian member of parliament said four Japanese and one Frenchmen were kidnapped in the raid, while the Irish foreign ministry said an Irish citizen was among the hostages.

The US state department confirmed that US citizens were also among the hostages taken.

The Masked Brigade was formed by al-Qaeda’s longtime figure in the Sahara region, Moktar Belmoktar, a one-eyed Algerian who recently declared he was leaving the network’s Algerian branch, al-Qaeda in the Islamic Maghreb, for his own group.

France launched a major offensive against the rebel group Ansar al-Dine in Mali on January 11 to prevent them from advancing on the capital, Bamako.

Algeria announced on Tuesday that it had closed its border with Mali, but the 2,000km desert frontier is almost impossible to seal.

Algeria had long warned against military intervention against the rebels, fearing the violence could spill over the border.

French President Francois Hollande confirmed that there were French nationals among the hostages.

“There were and there are French nationals at this facility,” Hollande told a news conference.

Hollande said that while the situation was very confused, he had total faith in the Algerian authorities’ ability to resolve the crisis and would be speaking to Algerian President Abdelaziz Bouteflika later in the day. 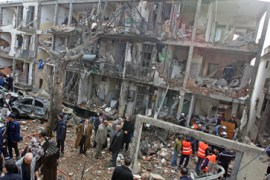 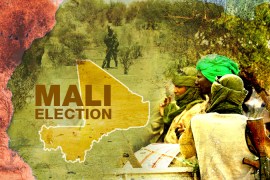