An Iraqi member of parliament and his bodyguard have been killed in a suicide attack in western Anbar province, officials say.

Ayfan Sadoun al-Essawi, a member of the secular Sunni-backed Iraqiya bloc that is part of Nuri al-Maliki’s national unity government, was targeted as he inspected a road being constructed south of Fallujah.

“The moment he stepped out of the car to check out this road between Fallujah and Amriyah, at this moment, there was a man. He came to him, hugged him, said Allahu Akbar, and blew himself up,” Sohaib Haqi, the chief of Essawi’s office, said.

Dr Assem al-Hamdani at Fallujah hospital put the overall toll at seven dead – Essawi, four of his bodyguards and two civilians – and six wounded, including four of the politician’s guards.

Essawi, 37, was a former leader of the Sahwa, a collection of Sunni tribal militias that fought against al-Qaeda from late 2006, helping to turn the tide in the fight against the armed group.

He was himself inducted into parliament after another Sunni MP, Khaled al-Fahdawi, was killed in a suicide attack at the Umm al-Qura mosque in west Baghdad in August 2011.

The attack is likely to raise tensions with Iraq already grappling with a political crisis that has pitted Maliki, the prime minister, against Iraqiya, which has frequently demanded his resignation.

Anbar province, which is dominated by Iraq’s Sunni minority, has been the scene of more than three weeks of protests against Maliki’s Shia-led government.

They were prompted by the arrest of bodyguards assigned to Iraq’s Sunni finance minister, who comes from the same al-Essawi tribe as the politician who was killed on Tuesday. 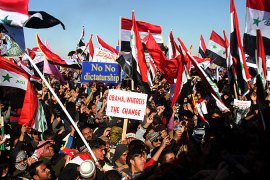 Roadside bomb explodes near convoy carrying Sunni minister who has been a central figure in anti-government protests. 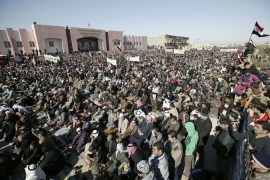 Thousands of Sunnis take to streets of Baghdad and other parts of the country to decry alleged targetting of minorities.