An Egyptian court has accepted an appeal by ousted president Hosni Mubarak and his former interior minister Habib el-Adly, allowing them to be retried over the killings of protesters in the 2011 uprising.

Judge Ahmed Ali Abdelrahman told the court on Sunday he had accepted the appeals by Mubarak, el-Adly and the prosecution. The decision cancelled all previous rulings by the Cairo criminal court.

No date has been set for the start of their retrial. The defendants will remain in jail because they still must face separate trials.

A small crowd of Mubarak loyalists in the courtroom erupted with applause after the ruling was read. Holding portraits of the former president, they broke into chants of “Long live justice”. Another jubilant crowd later gathered outside the hospital where Mubarak is being held in Cairo.

Mubarak and el-Adly were sentenced to life in prison in June last year in a court ruling that held them responsible for the deaths of protesters killed by security forces.

If convicted in the re-trial, Mubarak could face a life sentence or have it reduced. Under Egyptian law, a defendant cannot face a harsher sentence in a retrial, meaning the former leader cannot face the death penalty.

After the original trial, many in Egypt were disappointed that Mubarak had not been explicitly convicted of ordering the killing of protesters.

Instead, he was found guilty of being complicit in the killings. Around 850 protesters reportedly died in the uprising, although some rights groups claim the figure is higher.

Mubarak’s defence lawyers had argued the former president did not know of the killings or realise the extent of the street protests. However, an Egyptian fact-finding mission has reportedly determined that he watched the uprising against him unfold through a live TV feed at his palace.

In a retrial, the prosecution has the right to present new evidence. But Mohamed Abdel Razek, one of Mubarak’s lawyers, said the retrial would be based on the same evidence used in the original trial.

“No new evidence will be added to the case,” he said, adding that there were countless flaws in the verdict. “[These]
resulted in the unfair trial of our client.”

Al Jazeera’s Rawya Rageh, reporting from Cairo, said the appeals court is known to be one of the best courts in the country.

“It is very meticulous and goes through every single detail,” she said.

On Saturday, an ailing Mubarak was interrogated over fresh charges of corruption and ordered detained for 15 days pending an investigation.

He is accused of accepting gifts worth around $1m from the country’s flagship state newspaper al-Ahram. 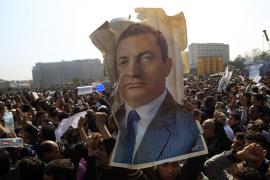 Mubarak sentence could take years to be carried out

Al Jazeera’s Sherine Tadros, reporting from outside the police academy, said the judge in the case has the right to delay the verdicts for the case against Hosni Mubarak and his two sons, Gamal and Alaa, but that observers say that this is unlikely. “What’s more likely to happen is he will 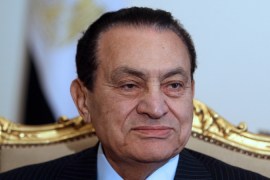 Egypt’s ex-President is back to prison from hospital after an improvement in his health. 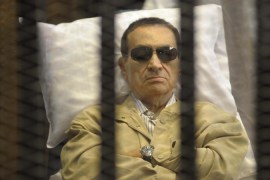 Millions of assets of ex-Egyptian president and associates located, including Marbella beach properties and luxury cars.