Suspected al-Qaeda fighters and other armed groups have killed at least 73 people in a wave of attacks in Iraq, gunning down soldiers at an army post and bombing police recruits waiting in line to apply for jobs.

Sunday’s violence, which struck at least 11 cities and also wounded at least 213 people, highlighted armed groups’ attempts to sow havoc in the country and undermine the government.

There was no immediate claim of responsibility for the attacks but security forces are a frequent target of al-Qaeda’s Iraq branch, which has vowed to reassert itself and take back areas it was forced from before US troops withdrew from the country last year.

In the deadliest attack, gunmen stormed a small Iraqi Army outpost in the town of Dujail before dawn, killing at least 10 soldiers and wounding eight more, according to police and hospital officials in the nearby city of Balad, about 80km north of Baghdad.

The officials spoke on condition of anonymity as they were not authorised to release the information.

Hours later, a car bomb struck a group of police recruits waiting in line to apply for jobs with the state-run Northern Oil Company outside the northern city of Kirkuk.

City police commander Sarhad Qadir said seven recruits were killed and 17 wounded. He said all the recruits were Sunni Muslims and blamed the early morning attack on al-Qaeda, but did not provide details.

The carnage even stretched into the country’s south, where bombs stuck to two parked cars exploded in the Shia-dominated city of Nasiriyah, 320km southeast of Baghdad.

The blasts were near the French consulate and a local hotel in the city, although the consulate did not appear to be a target of the attack.

Local deputy health director doctor Adnan al-Musharifawi said two people were killed and three were wounded at the hotel, and one Iraqi policeman was wounded at the consulate.

Al-Musharifawi said no French diplomats were among the casualties.

On Sunday evening, another car bomb, this time in the Al Washash neighbourhood of western Baghdad, added a further two to the day’s death toll, leaving at least seven people injured. A later car bomb targeted a bird market in the Huriyah district of the city, killing three and injuring at least 14. Meanwhile, also in north-west Baghdad, a car bomb hit a crowded restaurant in the Shullah neighbourhood, leaving five dead and injuring at least 38 people.

Journalist Ahmed Rushdi, reporting from Baghdad, told Al Jazeera that, according to him, it was not only al-Qaeda that was behind the attacks.

“It is also the insurgency against the government and the political parties, because there is a major political dispute between al Maliki and his opponents,” Rushdi said.

“It is another day in the major failure of the security forces in Iraq. The people here are asking themselves; what is the government doing to regain control of the situation? There seems to be no real intelligence data concerning these attacks.”

Al-Qaeda’s Iraq franchise, also known as the Islamic State of Iraq, has for years had a hot-and-cold relationship with the global network’s leadership.

The two shared the goal of targeting the US military in Iraq and, to an extent, undermining the Shia government that replaced Saddam Hussein’s regime.

But al-Qaeda leaders Osama bin Laden and Ayman al-Zawahri distanced themselves from the Iraqi fighters in 2007 because their attacks also killed Iraqi civilians instead of focusing on Western targets.

A string of smaller attacks on Sunday also struck nine other cities, including Baghdad.

In the capital’s eastern Shia neighborhood of Husseniyah, roadside bombs killed a policeman and a passer-by, security and health officials said.

Another eight people – including four soldiers – were wounded, the officials said.

The rest of the attacks were car bombs that hit cities stretching from the southern port city of Basra, Iraq’s second largest, to the city of Tal Afar northwest of Baghdad near the Syrian border.

The blast in Basra killed three people and wounded 24, while the bomb in Tal Afar killed two passers-by and wounded seven, officials said.

A roadside bomb in Taji, just north of Baghdad, left two passers-by dead and 11 injured, and explosions in the Sunni towns of Hawija and Ar Riyad, outside the flashpoint city of Kirkuk north of Baghdad, wounded seven people.

In Tuz Khormato near the city of Kirkuk, some 290km north of Baghdad, a car bomb outside of a market killed four and wounded 41 people, said Salahuddin provincial health director Raeed Ibrahim.

And in Kirkuk itself, Qadir said three midmorning explosions – two car bombs and a roadside bomb – killed seven and wounded about 70.

Kirkuk has been a flashpoint for years with its mix of Sunni Arabs, Kurds and Turkomen, who all claim rights to the city and the oil-rich land that surrounds it. 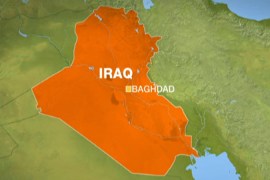 At least 13 people killed in separate explosions north of the capital Baghdad. 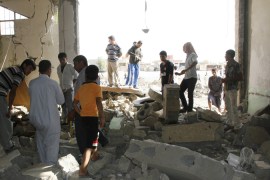 At least nine people killed in multiple blasts targeting Shia worshippers and security forces in north of the country. 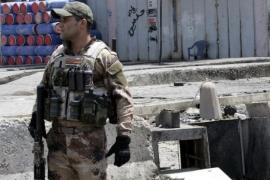 Eight reported killed in city north of Baghdad a day after 33 people were killed in attacks targeting security forces. 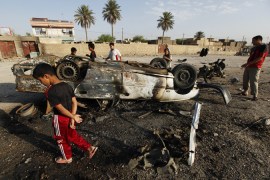 Spate of deadly attacks across Iraq

At least 107 people killed after series of explosions and gun attacks in various cities, including capital Baghdad.