An Egyptian court in the Suez Canal city of Ismailiya has upheld the sentence of 14 militants to death by hanging, and four others to life imprisonment, over the killing of seven people in the Sinai Peninsula last year.

The country’s top cleric had approved the death sentences, as is customary. Six men will be hanged, while the eight others were being tried in absentia for the attacks on a bank and police station.

The men, who belong to a group called Tawheed wal Jihad (Monotheism and Holy War), were charged by the prosecutor with murdering members of the army, police and a civilian in el-Arish in June and July 2011.

The original sentencing of the men occurred on August 14.

“These are clearly very serious offences,” said Al Jazeera’s Jacky Rowland, reporting from Cairo. “That members of the security forces were killed made the court take a particularly dim view of these crimes.”

The verdicts were met with cries from the accused against President Mohamed Morsi, the head of state elected this year whom the defendants blamed for the court’s decision.

“Morsi is an infidel and those who follow him are infidels,” shouted one defendant.

Others cried “God is Great” as they listened to the judge from inside the metal cage in which they stood during trial sessions. The bearded men wore traditional white robes and some were seen holding the Quran.

The same group was accused of carrying out a series of bomb attacks in 2004 and 2005 against tourist resorts in South Sinai, which lead to the deaths of 34 people.

“This court decision is a milestone. It gives a strong message to the militant groups that the state, President Mohamed
Morsi’s government, will not tolerate attacks on the Egyptian armed forces and police,” said Nageh Ibrahim, an Islamist
researcher and a former fighter.

Egypt’s Sinai has suffered from faltering security since President Hosni Mubarak was swept from power in a popular
uprising in February 2011. Smuggling and other criminality by armed groups is rife in the region.

Egypt’s army and police launched a major sweep after a daring raid that killed 16 Egyptian border guards on August 5.

The Egyptian government and Israel say they are co-ordinating on the security operation, in which hundreds of Egyptian troops with tanks, armoured vehicles and helicopters were sent in a joint operation with police to raid hideouts, arrest suspects and seize weapons.

But our correspondent said that, despite the ongoing operation, there is little information about how successful it has been in bringing the Sinai back under government control. 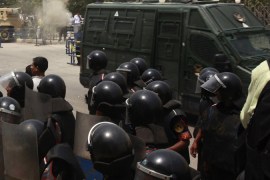 Egyptian security forces have killed three men wanted in connection with a spate of deadly attacks in the Sinai peninsula over the last two years, security sources say.

Police arrested 10 people and divers retrieved body parts from the sea a day after a triple bomb attack killed 24 people and wounded more than 80, many of them foreigners in Egypt’s Sinai resort of Dahab.