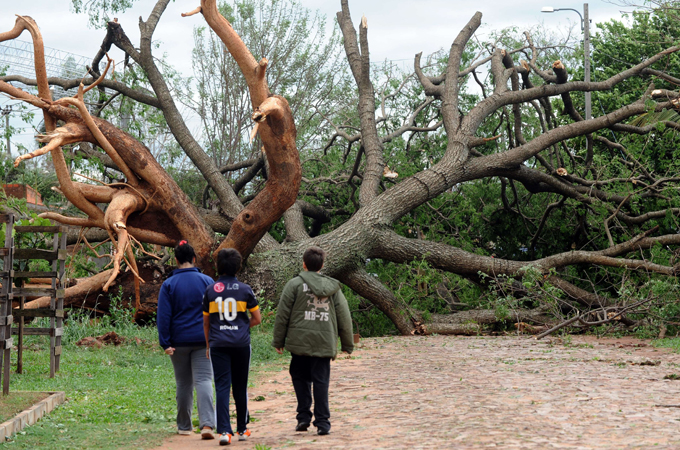 A tree knocked down during a storm in Mariano Roque Alonso, Paraguay in the early hours of Wednesday morning. [AFP]

Parts of South America have been hit by severe storms that have caused widespread disruption. Bad weather tore through parts of Bolivia and Paraguay this week leaving at least eight people dead in the process.

On Tuesday a devastating storm ripped through central Paraguay killing five people and leaving another three seriously ill. Worst hit was the district of Mariano Roque Alonso, which is about 18 km to the northeast of the capital city, Asuncion.

The storm also caused damage to cars, houses, as well as a military command unit where another 23 personnel were also hurt.

The strong winds, which were generally in excess of 50 kph battered many homes and also caused a massive antenna to fall on top of a house. The storm swept through within the space of 30 minutes and the highest gust recorded reached 140 kph.

Santa Cruz recorded 150mm of rain in 24 hours. Most schools and public buildings have been closed and the clean-up operation is now underway. However, the city still remains in a state of emergency.