The Reverend Sun Myung Moon was a self-proclaimed messiah who built a global business empire.

He called both North Korean leaders and American presidents his friends, but spent time in prisons in both countries. His followers around the world cherished him, while his detractors accused him of brainwashing recruits and extracting money from worshippers.

These contradictions did nothing to stop the founder of the Unification Church from turning his religious vision into a worldwide movement and a multibillion-dollar corporation stretching from the Korean Peninsula to the United States.

Moon died on Monday at a church-owned hospital near his home in Gapyeong, northeast of Seoul, two weeks after being hospitalised with pneumonia, Unification Church spokesperson Ahn Ho-yeul told the AP news agency.

Moon’s wife and children were at his side, Ahn said. He was 92.

Moon founded his Bible-based religion in Seoul in 1954, a year after the Korean War ended, saying Jesus Christ personally called on him to complete his work.

The church gained fame – and notoriety – by marrying thousands of followers in mass ceremonies presided over by Moon himself. The couples often came from different countries and had never met, but were matched up by Moon in a bid to build a multicultural religious world.

Today, the Unification Church claims three million followers worldwide, including 100,000 members in the US, Ahn said. But ex-members and critics say the figure is actually no more than 100,000 worldwide.

The church’s holdings included the Washington Times newspaper; Connecticut’s Bridgeport University; the New Yorker Hotel, a midtown Manhattan art deco landmark, and a seafood distribution firm that supplies sushi to Japanese restaurants across the US. It acquired a ski resort, a professional football team and other businesses in South Korea. It also operates a foreign-owned luxury hotel in North Korea and jointly operates a fledgling North Korean automaker.

The church has been accused of using devious recruitment tactics and duping followers out of money. Parents of followers in the United States and elsewhere have expressed worries that their children were brainwashed into joining.

Moon began building a relationship with North Korea in 1991, even meeting with the country’s founder, Kim Il Sung, in the eastern North Korean port city of Hamhung. In his autobiography, Moon said he urged Kim to give up his nuclear ambitions, and that Kim responded by saying that his atomic programme was for peaceful purposes and he had no intention to use it to “kill my own people”.

“The two of us were able to communicate well about our shared hobbies of hunting and fishing,” Moon wrote. “At one point, we each felt we had so much to say to the other that we just started talking like old friends meeting after a long separation.”

In 2009, Moon married 45,000 people in simultaneous ceremonies worldwide in his first large-scale mass wedding in years, the church said. Some were newlyweds and others reaffirmed past vows. He married an additional 7,000 couples in South Korea in February 2010. The ceremonies attracted media coverage but little of the controversy that dogged the church in earlier decades.

The church’s acquisitions also include dozens of companies ranging from hospitals and universities to a professional soccer team in Brazil and a ballet troupe. 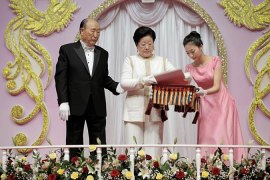 In the Kingdom of Reverend Moon

South Korea’s Unification Church is facing its biggest challenge yet as it prepares for a future without its founder.