Tens of thousands of Ethiopians and many African leaders have attended the state funeral in Addis Ababa of Ethiopia’s long-serving Prime Minister Meles Zenawi, who died suddenly last month.

At least 15 heads of state, mostly from African countries, and several foreign dignitaries arrived in the Ethiopian capital on Saturday to pay their respects and sign a book of condolences at the National Palace, where Meles’ flag-draped coffin was on display.

The prime minister’s coffin, draped in the national flag and placed on a black carriage, moved slowly from his residence to
the vast Meskel Square, in a procession that included a military band and religious dignitaries.

The coffin was set in front of the crowd waiting in the square, and the assembled priests, wearing the colourful robes of the country’s Orthodox Tewahedo Church, intoned solemn prayers.

Mourners waved flags and some wept as they listened to speeches from their prime minister-designate, other African leaders and a senior US official.

Zenawi died in a Brussels hospital on August 20 after an extended illness. He had not been seen in public for two months, spurring rumours about his health.

The leader of the Horn of Africa nation took power in 1991 after toppling dictator Mengistu Haile Mariam.

He had remained at helm of Ethiopia, a relatively stable country in the volatile Horn of Africa, ever since. But while he was credited with bringing about widespread economic growth, many criticised him for what they said was a crackdown on opposition groups and journalists.

Heavy rain poured down as the cortege, flanked by top military officers, moved in procession to the Holy Trinity Cathedral for the funeral service and burial ceremony.

Regional leaders praised Meles’ record, saying he provided leadership to the whole of Africa. President Jacob Zuma of South Africa said Ethiopia had lost “a patriot and a visionary”.

“His was a life of immense courage, vision and enterprise which he devoted to the advancement of his fellow citizens in this country and across Africa,” said Rwandan President Paul Kagame.

The US delegation was led by Susan Rice, the US ambassador to the UN, who described Meles as “unpretentious and direct”.

Boni Yayi, the president of Benin, said the death of Meles was “a great loss” not just for Ethiopia but for the African continent because of his vision and his support of pan-Africanism.

Also at the funeral were Sudanese President Omar al-Bashir and Salva Kiir, the leader of South Sudan.

The leaders shook hands with Meles’ family members and some laid wreaths at the base of the coffin.

Hundreds of Ethiopians, many of them in tears, joined the gathering at the palace on Saturday.

Several African leaders spoke at the funeral, as well as Ethiopia’s deputy Prime Minister Hailemariam Desalegn, who will take over government until national elections in 2015.

No date has been fixed for Desalegn’s swearing in. He is a relatively unknown politician who hails from the south, unlike many of the country’s political elite who are from the north.

While Ethiopia has hosted a series of state funerals in recent decades, including that of popular musician Tilahun Gessesse in 2009, the last leader to be honoured was Empress Zawditu in 1930.

Ethiopia’s last emperor Haile Selassie, who was murdered in 1975 by coup leaders, is also buried at Holy Trinity Cathedral. 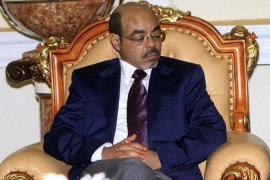 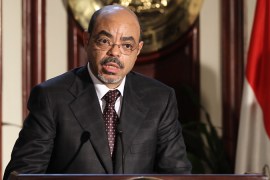 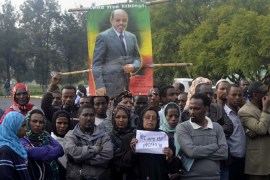 He was praised for bringing economic growth to one of Africa’s poorest nations, but was it at the cost of democracy? 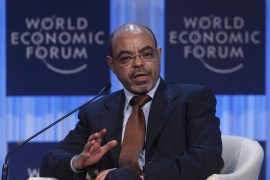