Pakistani police say authorities have arrested an imam who had accused a Christian girl of blasphemy.

Munir Jaffery, an investigating officer in the case, said on Sunday that Khalid Jadoon Chishti was arrested late on Saturday for allegedly having planted pages of a Quran in a shopping bag containing burned papers and ash that had been carried by the Christian girl.

Fourteen-year-old Rimsha Masih was later accused of burning pages of the Quran, a serious offence in Pakistan that can result in life in prison.

The reversal could lead to the girl being released from prison and defuse what has been a religiously charged case in Pakistan.

The case has been especially sensitive because of the girl’s young age and questions about her mental capacity.

According to Pakistan’s DawnNews, a large number of police made the arrest after Hafiz Zubair, a muezzin in the same mosque, gave witness testimony to a magistrate stating that he had seen Chishti plant the evidence.

Zubair said that the imam had received the burnt pages in two bags from a local complainant, and that he had tried to prevent the leader from tampering with the evidence.

“This is yet another intriguing twist in the case, which hasn’t really moved further along,” said Al Jazeera’s Imtiaz Tyab, reporting from Islamabad.

“There are a lot of legal issues going on here but not an awful lot of clarity coming from the courts,” our correspondent said. “There’s no really clear sign [Masih] will be released any time soon.”

An Islamabad court on Saturday adjourned until September 3 the bail hearing in the case.

Judge Muhammad Azam Khan asked police to investigate a bail application made on Rimsha Masih’s behalf after prosecutors claimed paperwork had not been signed by the girl or her mother.

On Friday, the local court had ordered Masih to be held in prison for two more weeks as police finish their investigation and decide whether to charge her, her lawyer and police said about the extension of her judicial remand.

Speaking to reporters outside the court, Rimsha’s lawyer Tahir Naveed Chaudhry accused prosecutors and lawyers for her accuser of using delaying tactics.

“The medical report has declared her an underage person with low IQ. How can she commit blasphemy? She is innocent and should be released,” he said.

The case has stoked controversy at home and abroad, and the legal proceedings have focused attention on Pakistan’s strict blasphemy laws that can result in prison or even death for insulting Islam.

Human rights activists have long criticised the laws and said they are used to persecute non-Muslims and settle personal scores.

The court’s decision on Friday was procedural, since the girl’s initial two-week detention ended on Thursday, said her lawyer.

On Friday, local TV video from the court showed the girl covered in a white sheet to protect her identity, and surrounded by police, including two female constables. 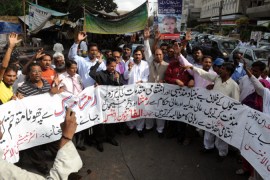 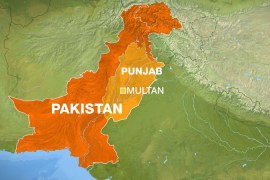 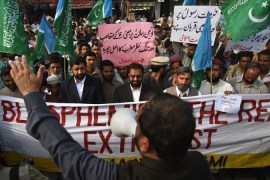