Angola President Jose Eduardo dos Santos’ nearly 33 years in power looks set to be extended after his ruling People’s Movement for the Liberation of Angola (MPLA) party took 74.46 per cent of votes in national elections, according to provisional results.

The results from Friday’s voting announced by the National Elections Commission showed the governing party with three-fourth of the vote – far ahead of its nearest rivals with votes counted from over 85 per cent of polling stations, but the party’s margin of victory is down from the 82 per cent that it won in 2008.

The daily Jornal de Angola newspaper on Sunday declared Santos the president-elect, two days after general elections, but the opposition said it was gathering evidence of fraud.

“The head of the party list, Jose Eduardo dos Santos, is the president-elect of the republic,” the paper said on its website.

The provisional results gave the MPLA’s closest challenger, former rebel group UNITA, 18 per cent, while the third-placed CASA-CE party had 4.5 per cent. The provisional turnout was just over 57 per cent.

Further results would be announced later, the commission said, but those in so far showed the MPLA on track for a sweeping victory in the vote, which had passed peacefully.

Dos Santos had been widely expected to win the election, which was constantly postponed until last year, when the government changed the constitution so that the leader of the party with the most votes becomes president.

Voters on Friday were electing politicians for the 220-seat parliament.

Abel Chivukuvuku, a UNITA dissident who helped form the CASA-CE four months ago, told reporters his party along with UNITA had complained repeatedly of serious irregularities in the vote preparations and the electoral process.

But another prominent CASA-CE member, candidate for Luanda William Tonet, dismissed the provisional results as “cheating taken to its maximum level”.

“This is like a declaration of war by the MPLA … it indicates to citizens that there can be no alternative through the electoral route,” he told Reuters news agency.

UNITA leader Isaias Samakuva has long criticised the electoral process, saying the voters roll hadn’t been authenticated while some 2,000 of his party’s observers were denied accreditation to polling stations.

A statement on the party’s website said both UNITA and CASA-CE “are preparing to present documents that prove the results presented by the National Electoral Commission are not the same as those tabulated inside the polling stations in different parts of the country”.

However, Pedro Verona Pires, chief of the African Union’s observer team, described the organisation of the election as “satisfactory” compared to the country’s previous election in 2008.

“Everyone agrees that the elections this year were better organised than in 2008,” Pires, who is also the former president of Cape Verde, told AFP news agency.

This is the country’s third national election since Angola won independence from Portugal in 1975, and the second since the end a decade ago of a 27-year civil war.

This southern African nation was a Cold War battlefield until 2002, with dos Santos’ MPLA backed by Cuban soldiers and a Soviet war chest, pitted against UNITA, which was backed by apartheid South Africa and the US.

Half a million people died in the war, while more than four million, a third of the population, were displaced and much infrastructure was destroyed.

Since the war ended in 2002, Angola has dominated the list of the world’s fastest growing economies and is sub-Saharan Africa’s second-largest oil producer, after Nigeria, fuelling a building boom of houses, hospitals, schools, roads and bridges.

But 87 per cent of urban Angolans live in shanty towns, often with no access to clean water, according to UNICEF, and more than a third of Angolans live below the poverty line.

Abel Chivukuvuku, a UNITA dissident who helped form the CASA-CE four months ago, told reporters his party, which along with UNITA had complained repeatedly of serious irregularities in the vote preparations and the electoral process, was analysing the results before deciding whether to accept or reject them.

But another prominent CASA-CE member, candidate for Luanda William Tonet, dismissed the provisional results as “cheating taken to its maximum level”.

“This is like a declaration of war by the MPLA … it indicates to citizens that there can be no alternative through the electoral route,” he told Reuters news agency. 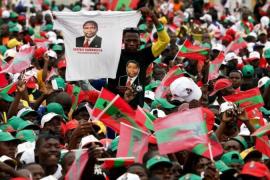 Angola’s brush with hope and despair

In the run-up to elections, Al Jazeera finds pools of misery amid signs of prosperity in a rapidly expanding Luanda. 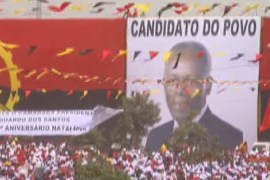 Ahead of election, some Angolans say nation’s fast-growing wealth has eluded them, accusing MPLA of corruption. 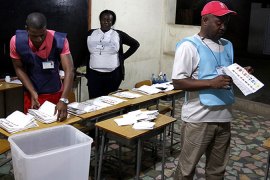