The armed opposition and government in Syria have both committed war crimes during the 18-month uprising against President Bashar al-Assad, the United Nations and Human Rights Watch alleged on Monday.

“We have good evidence in terms of summary executions, forced disappearance, arbitrary detentions, torture and sexual violence from both sides,” said Paulo Pinheiro, head of the UN investigative panel.

“But of course there is not an equivalence between those crimes committed by the government forces and the armed groups and the Free Syrian Army … there is a great disparity,” he told Al Jazeera.

Human Rights Watch, a US-based group, has accused the opposition of subjecting detainees to torture and committing extrajudicial or summary executions in several areas.

In a report released on Monday, the group said that such incidents occurred in the northern provinces of Idlib and Aleppo, as well as the coastal region of Latakia. The UN panel said it has compiled a list of those it suspects of carrying out war crimes but is not releasing their names.

HRW said that such acts in the context of an armed conflict were war crimes and could constitute crimes against humanity if they occurred in a widespread and systematic manner.

The group documented more than a dozen extrajudicial and summary executions by opposition forces.

HRW said three opposition leaders who were confronted with evidence of extrajudicial executions said those who killed deserved to be killed and justified the acts by saying that executions were reserved for the “worst criminals”.

The UN investigators said they had gathered “a formidable and extraordinary body of evidence” and urged the UN Security Council to refer the situation in Syria to the International Criminal Court.

“A second confidential list of individuals and units believed to be responsible for violations is being provided to the High Commissioner of Human Rights,” Pinheiro told the UN Human Rights Council in Geneva.

Moreover, the UN confirmed that “foreign elements” were increasingly playing a role in the conflict in Syria.

Pinheiro said there was an “increasing and alarming presence” of religious extremists in Syria, some joining the rebels and others operating independently.

Their presence tended to radicalise the rebels who have also committed crimes, he said.

Western countries are seeking yet another condemnation of President Assad’s government at the Security Council session.

“The international community must ensure impunity will not prevail,” Mariangela Zappia, the European Union’s ambassador, said at Monday’s debate that was also attended by Syrian envoy Faysal Khabbaz Hamoui.

The commission said that it would not be publically releaseing the names on its list, due to the lower standard of proof employed by commissions of inquiry as compared to courts of law, Pinheiro said.

Fighting continued in Aleppo on Monday, amid a disputed claim that the government had seized the strategic Midan district from rebels.

The army clashed with rebel fighters in several districts of the northern city, which has been the site of fierce fighting since July 20, the Syrian Observatory for Human Rights said. At least 105 people were killed on Monday.

One battle broke out near a building housing the feared air force intelligence service, and rebels also attacked a military post in the New Aleppo area, the UK-based activist group said.

Shelling was also reported in the Al Hajar Al Aswad district of Damascus, and there were reports of bombs from Syrian warplanes landing in Lebanese territory.

Also on Monday, Lakhdar Brahimi, the joint UN-Arab League envoy to Syria, was due to hold talks with Nabil al-Arabi, the Arab League chief, in Cairo.

“Brahimi will brief Arabi on his visit to Syria and his meeting with Syrian President Bashar al-Assad and members of the opposition there,” an Arab League official said.

The veteran Algerian and international diplomat left Damascus on Sunday, saying that worsening conflict in Syria threatens both the region and the world.

“The crisis is dangerous and getting worse, and it is a threat to the Syrian people, the region and the world,” said Brahimi, who replaced Kofi Annan after the failure of Annan’s proposed six-point peace plan.

Brahimi is also expected to attend part of a meeting of foreign ministers of a new Syria “contact group” in Cairo. The group includes Saudi Arabia, Iran and Turkey, although the Saudi foreign minister, Prince Saud al-Faisal, did not attend the meeting, and no one appeared in his place.

Turkish Foreign Minister Ahmet Davutoglu said that “regional ownership of issues in our region” was the motivating factor for the meeting.

He said the goal is to help form “a strong Syria” but that it would take more than just one meeting to come up with a solution.

Iranian Foreign Minister Ali Akbar Salehi echoed the need for more time and more meetings, noting that while Iran’s position differs from the other parties at the meeting – Iran is the only participant that backs the Syrian government – common interests unified them.

Al Jazeera’s Steve Chao, reporting from Cairo, said that more conversations will be had at the upcoming UN General Assembly in New York in the comings days and the the focus of today’s meeting was not regime change but to “end the bloodshed”.

“This quartet says it will meet several times more, but the big question is, where is Saudi Arabia and will Saudi Arabia attend?” Chao said.

Salehi claimed there was more common ground than differences among members of the contact group, Chao said, but given Tehran’s explicit support for Assad and Turkey’s assistance to rebels trying to topple him, it remains unclear if anything can be achieved. 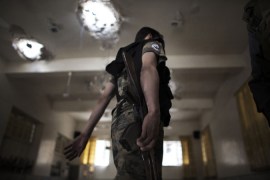 Rebel-held areas in Aleppo and Rastan pounded by government troops, as deadly clashes continue across the country. 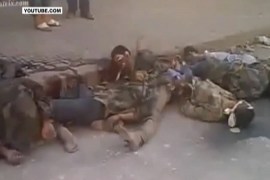 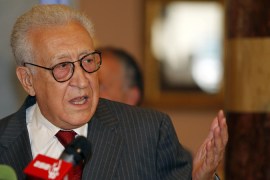 Is Lakhdar Brahimi the man for the Syria job?

We examine the hurdles facing the UN and Arab League envoy as he admits to having no plan to end the conflict. 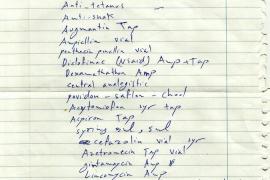 Leaving Syria with a promise

Getting medical aid to Syria is not a political decision – it is a humanitarian responsibility.