Police have prevented Julius Malema, the expelled youth leader of South Africa’s ruling African National Congress (ANC), from addressing about 3,000 strikers at a stadium near the Marikana mine where officers killed 34 miners last month.

Malema was due to address miners angry at a police crackdown which began on Saturday during which rubber bullets and tear gas were fired at a shantytown in Marikana.

Monday’s development came as the Congress of South African Trade Unions (COSATU) held its national conference in Johannesburg. The strike at Lonmin’s platinum mine in Marikana, where the miners were shot, topped the agenda.

Al Jazeera’s Haru Mutasa, reporting from Marikana, said police refused to allow Malema to speak to the strikers, saying he would incite violence and asking him to leave.

“Malema tried to push his way through the police, there was a scuffle and the police pushed him back into the car,” she said.

“They pushed him back into the car and he then drove off.”

Police vehicles and a helicopter hovering above the politician’s car escorted Malema out of the town.

“People thought that Malema was being arrested and started throwing stones at the police cars,” Mutasa said.

Mutasa said that although most people had gone home the situation was still very tense and that the police were on high alert.

Elsewhere in the North West region, 42 people were arrested on Monday for public violence after “illegally gathering”, at the Robega Village, near the Rasimone North mine shaft.

On Sunday, police persuaded hundreds of strikers at another mine, run by the Anglo American company, to halt an illegal protest without violence.

The presence of 1,000 soldiers brought into the “platinum belt”, 100km northwest of Johannesburg, has escalated tensions over union rivalries and higher pay demands that have stopped work at one gold and six platinum mines.

Mutasa, reporting from the mine on Sunday, said the police went out on foot, cocked their guns, then got back in their vehicles and seemingly drove away.

“The miners on the road here are defying government orders not to assemble and they are quite defiant now. They are saying that “if the police come back, there will be war”.

Meanwhile, at the gathering of the COSATU, the major talking point for delegates was the crisis that has gripped the country’s mining sector for the past five weeks with the President Jacob Zuma saying that the country could face a recession if the strikes continue.

Zuma told the union federation gathering that strikes in country’s mining industry has cost South Africa close to $563m (4.5bn rand) in lost gold and platinum production this year and had subtracted nearly $388m (3.1bn rand) from the national treasury.

Zuma also condemned the violence that have marked the ongoing strikes saying that violence cannot become a culture of South African labour relations.

He blamed poor living and working conditions of miners on the apartheid past and the failures of mining companies to honor a charter to improve the lives of miners.

Mining companies are required to improve the housing and living conditions of workers and also to invest in skills development, racial equity in employment and ownership as well as local community development, said Zuma.

Tens of thousands of miners remain on strike, and many are critical of the close ties between the main labour unions and the ruling ANC party, to which COSATU is an alliance partner. The striking miners have accused union leaders of being too close to politicians.

Al Jazeera’s Mike Hanna, reporting from the congress venue in Johannesburg, said the meeting was happening against a backdrop of the labour dispute which has created great ruptures and splits within the union movement.

The congress election is being closely watched as an indicator of the federation’s support for Zuma, ahead of the ANC’s national election later this year. COSATU has previously supported Zuma.

The first day of the four day conference ended on Monday with the executive maintaining its positions unopposed, but with Zuma only receiving a “lukewarm reception”, reported local newspaper, the Mail and Guardian.

Meanwhile local news wire, SAPA, reported that negotiators for striking Lonmin workers were confident that a deal was in sight to end a six-week strike at the mine in Marikana. 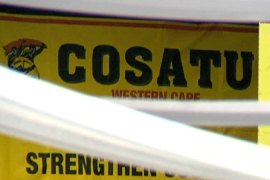 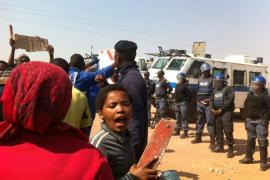 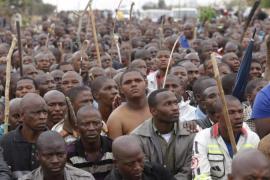 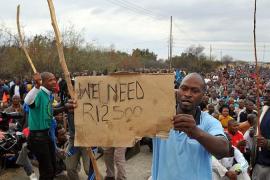