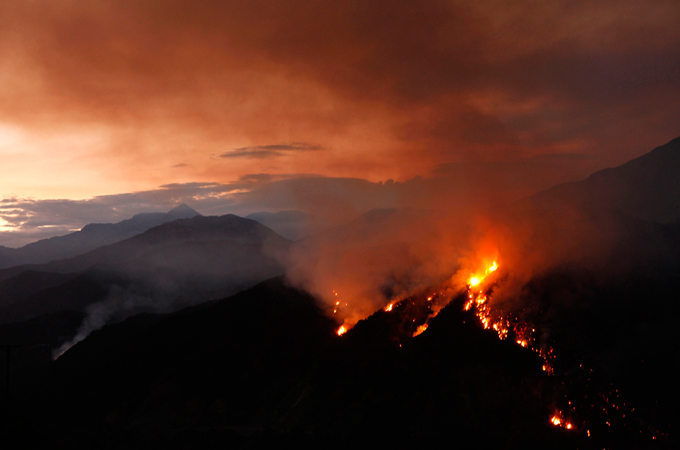 A wild fire broke out near the Getty Center in LA on Friday, threatening a number of homes in the Bel Air neighbourhood. [Reuters]

A number of blazes have broken out across western parts of the US, forcing hundreds of people to be evacuated from their homes. Much of the region has been dry for the past few weeks, humidity levels are low and some parts are now seeing temperatures soar.

On Thursday, the temperature in Los Angeles peaked at 28C which is around the September average. Friday saw the thermometer leap up to 37C. The temperature could even edge up a touch higher over the next few days.

One saving grace is that the winds have not shown any signs of picking up just yet. However, the fire risk remains particularly high in the Angeles Forest, the Santa Monica Mountains and the Ventura County Mountains.

A wild fire broke out near the Getty Center in LA on Friday, threatening a number of homes in the Bel Air neighbourhood. Fires in the Sepulveda Pass also spread quickly due to all the dry brush in the area, but firefighters have managed to keep the fires largely contained.

Skimming water from the Pacific Ocean, two Super Scooper aircraft capable of dumping 60,000 litres of water at a time have been making drops over the region. The aircraft are leased from Canada and are capable of grabbing the massive loads of water in just 12 seconds and fly for three hours without refuelling.

This is the 19th year that Los Angeles County has leased the aircraft, at a cost of $2.75 million for just three months. With hindsight, an out and out purchase may have been more cost effective in the long run.

Elsewhere, fast-growing wildfires have destroyed three homes in Washington State and threatened 350 more buildings. The fires are among a cluster of blazes raging across the west, many having been sparked by lightning strikes. One such blaze located around 85km east of Seattle is currently threatening around 125 homes.

Central Oregon has also been affected, with fires burning near the tourist town of Sisters, which has a population of around 2,000 people. Similarly, stubborn blazes have kept hundreds of residents from their homes in Montana and Wyoming. The weather offers little or no comfort in the short term with no sign of any significant rain across the west in the next few days.