The United States has sent Marines to protect its embassy in Sudan after three people died in Khartoum, the capital, during clashes over an on-line video which insults Islam.

The German and British embassies were also attacked, as a wave of demonstrations against the anti-Islam video swelled and swept across much of the Muslim world after Friday prayers.

Al Jazeera’s Harriet Martin, reporting from Khartoum, said: “The Sudanese authorities are taking things very seriously as they have deployed many, many riot police in the direction of the US embassy.”

US marines already arrived in Yemen’s capital Sanaa, where four people were killed near the American embassy on Friday.

“Today is your last day, ambassador”, and “America is the devil”, some placards carried by the protesters said.

In Tunis, the Tunisian capital, two people were killed in clashes with the police as crowds scaled the US embassy walls and set fire to trees within the compound. An American school was also set on fire by an angry mob.

Crowds also gathered against the California-made film in Lebanon, where two people were killed, and for the second day in Malaysia, Bangladesh and Iraq.

Jay Carney, a White House spokesperson, said they were monitoring events in the Muslim world.

“President Obama is following events, the violence is not justifiable, the President is making sure in his conversations with leaders in the region that the safety of US representation is respected in their countries,” said Carney.

Demonstrators furious at the trailer of the film made in the US they say insults the Prophet Muhammad also clashed with police near the US embassy in Cairo.

Reporting from Egypt, Al Jazeera’s Rawya Rageh said protesters belonging to ultra-conservative groups in Sinai stormed a camp for the UN multinational peacekeepers in Sheikh Zuwayed town. They brought down the flag and placed a black banner with the words “There’s no God but Allah, Muhammad is the Prophet of Allah.”

In Gaza, thousands of people rallied at demonstrations in Gaza City and the southern town of Rafah, a day after the ruling Hamas party urged citizens to turn out for protests after Friday prayers.

The film was blamed for an attack on the US consulate in Libya’s eastern city of Benghazi that killed the US ambassador and three other Americans on Tuesday, the anniversary of the September 11, 2001, al-Qaeda attacks on the United States.

Al Jazeera’s Hoda Abdel Hamid, reporting from Benghazi, said: “There is a lot of tension in Benghazi people are confused, they want to protest, but after what took at the US consulate, people are apprehensive, Libyan authorities still believe it was a planned attack at the embassy”.

In Nigeria, where radical Islamist sect Boko Haram has killed hundreds this year in an insurgency, troops opened fire in the air outside a mosque to disperse protesters in the city of Jos.

The protests present US President Barack Obama with a new foreign policy crisis less than two months before seeking re-election and tests Washington’s relations with democratic governments it helped to power across the Arab world.

Obama has vowed to bring those responsible for the Benghazi attack to justice, and the United States sent warships towards Libya which one official said was to give flexibility for any future action.

The ruling Muslim Brotherhood said it would organise marches and sit-ins in front of mosques – but none outside the US embassy in Cairo. Egypt has said the US government, which has condemned the film, should not be blamed for it, but has also urged Washington to take legal action against those insulting religion.

After talks with Italian leaders in Rome, President Mohammed Morsi reiterated his government’s determination to protect foreign diplomats on its soil. He also condemned the film as unacceptable.

In Libya, authorities said they had made four arrests in the investigation into the attack that killed Ambassador Christopher Stevens. US officials said it may have been planned in advance – possibly by an al-Qaeda-linked group.

Hillary Clinton, the US secretary of state, said Washington had nothing to do with the crudely made film posted on the Internet,which she called “disgusting and reprehensible”, and the Chairman of the US Joint Chiefs of Staff called a Christian pastor in Florida to ask him to withdraw his support for it.

The online video depicts the Prophet Muhammad as a womaniser and leader of a group of men who enjoy killing.

Egypt’s Coptic Orthodox church has condemned what it said were Copts abroad who had financed the film. 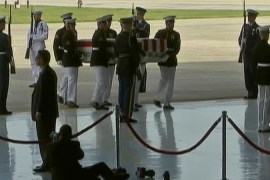 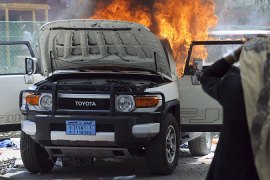 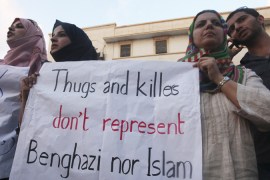