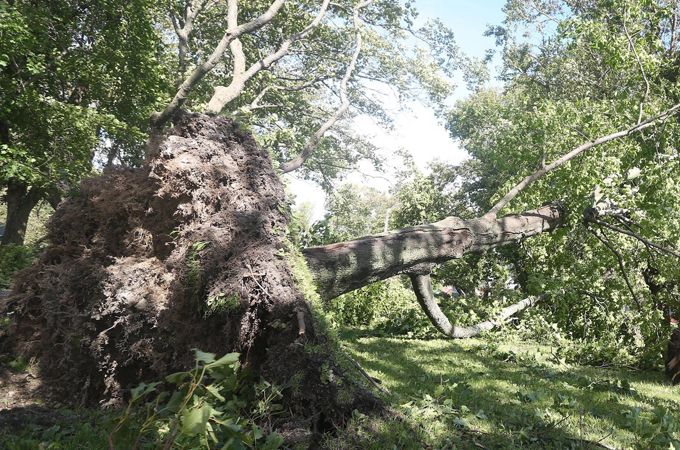 The strongest winds recorded from Leslie were 137 kph in Cape Pine, the southernmost point of the Avalon Peninsula. [AP]

In the region around the capital, St John’s, the winds gusted up to 131 kph, ripping down trees and power lines.

As the rains poured, the waves offshore reached 10 metres high.

Flights were cancelled, tree branches blocked several roads and a number of roofs were blown off houses. Approximately 100,000 households in St John’s and the Avalon Peninsula suffered power cuts.

Fortunately the system moved through the area fairly quickly, so the misery caused by the storm was short-lived. Leslie moved through Cape Bonavista and out to sea on Tuesday afternoon as a post-tropical storm.

Although it is rare for a tropical cyclone to hit Canada, Leslie is not the first to make landfall. Two years ago, Hurricane Igor hit Newfoundland as a category 1 storm.

Igor is the most destructive tropical cyclone to hit Newfoundland on record. It led to the death of one person and caused approximately $128 million worth of damage. There is relief that Leslie was not as strong or as damaging as Igor.

Leslie hit Newfoundland just two days after skirting past the island of Bermuda, giving torrential rain and strong winds, but there were no reports of any major damage or injuries.

As Leslie moved across Canada, a new storm, Tropical Storm Nadine, formed in the Atlantic.

Nadine is expected to move northwest over the next few days, strengthening, but steering clear of land.