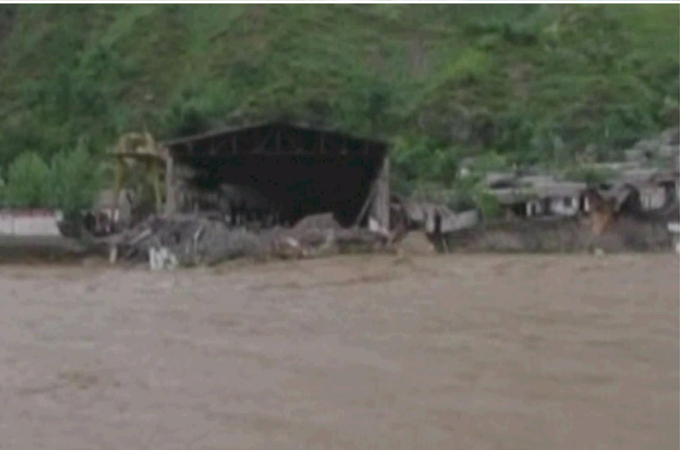 Weeks of torrential rain across North Korea have led to widespread and devastating flooding across much of the country. [Reuters]

Flood waters have left hundreds of homes and buildings damaged in North Korea according to state media reports. Nearly 200 people have been reported dead or missing following yet another spell of torrential rain over the past few days.

South Hamyong Province in the east of the country has been worst hit during this latest round of heavy downpours. The flood waters have destroyed more than 800 homes and 80 public buildings.

This is a mining region and as such has proved to be sadly vulnerable to the elements. Some 75 concrete and wooden bridges at the Komdok Mining Complex have been damaged along with the loss of life.

Gleaning information from North Korea can often be sketchy at best, but we do know that Pyongyang recorded 20mm of rain in the 24 hours up to 0600 GMT on Sunday. The September average is 112mm.

In the same time period Huichon recorded 24mm of rain. The heaviest rainfall total available at the time of writing was in Wonsan which received 48mm.

On their own these rainfall totals may not seem so impressive. However, this is a country that has gone from a state of drought just a few months ago to one of widespread flooding.

The floods are a result of a summer of incessant rain. It is the rainy season, but having been hit by two tropical in less than a week at the end of August, the ground remains saturated and the subsequent rainfall has done nothing but exacerbate an already critical situation.

As a result, there are concerns that the country could be facing a return to famine similar to the one which cost the lives of an estimated one million North Koreans in the 1990’s.

A recent UN report classified 7.2 million of the 24 million people as “chronically poor”. It also stated that a third of the children here were stunted due to poor nutrition.