A brigade of the Syrian rebel army has posted an online video claiming that the 48 Iranians it kidnapped were members of Iran’s elite Revolutionary Guards, and has warned Tehran of further abductions over its support for the Syrian government.

Forty-eight Iranian pilgrims were kidnapped from a bus in the Syrian capital on Saturday, the Iranian embassy consular chief in Damascus, told Iran’s state television.

“Armed terrorist groups kidnapped 48 Iranian pilgrims on their way to the airport,” Majid Kamjou told the IRIB network, which gave the report on its website.

In the video released on Sunday, fighters of the al-Baraa Brigade of the Free Syrian Army said that they had “captured 48 of the shabiha [militiamen] of Iran who were on a reconnaissance mission in Damascus”.

“During the investigation, we found that some of them were officers in the Revolutionary Guards,” said a man dressed in an FSA officer’s uniform, showing documents taken from one of the men, who appeared in the background.

In the footage, a group of men appeared sitting on the floor, while gunmen behind them carried the old Syrian flag that has been adopted by the rebels.

“We warn Iran that we will target all its installations in Syria… The fate of all Iranians working in Syria will be just like the fate of those, either prisoners, or dead,” the bearded officer said.

“They are 48, in addition to an [Afghan] interpreter,” said the officer, who is the FSA chief in the east Damascus suburb of Ghouta, claiming that the captives were members of a 150-strong group sent by Iran for “reconnaissance on the ground.”

But a Syrian opposition source dismissed the videotape as a fake designed to cover-up the responsibility of hardline Sunni Islamist group Jundallah.

The source said that the faction, which has no relation with the Sunni rebel group of the same name active in southeastern Iran, was one of an array of Sunni Islamist factions that have proliferated in Syria in recent months.

The group also has no links with the mainstream FSA, the source said.”Jundallah are an extremist Islamist group whose religious discourse is based on inciting hatred against Shias and Alawites,” the source said on condition of anonymity, referring also to the minority sect of Syrian President Bashar al-Assad.

The video “was just a cover-up for the fact that this operation was carried out in order to target Iranian Shias,” the source said.

The source also voiced scepticism about the suggestion that the kidnapped Iranians were Revolutionary Guards.

“It makes no sense that the hostages would be members of the Revolutionary Guard,” the source said. “If they were, why would they be travelling on a bus on the unsafe airport road?”

The source noted that Shia pilgrims, from Iran and elsewhere, have continued to visit holy sites in Syria despite the mounting insecurity, because they believe in the sanctity of their journey, even if it involves serious risk.

The source also blamed Jundallah for recent killings of Alawite and Shia civilians, as well as 15 Syrian troops, in Yalda, outside Damascus.

The rebels said that they were not in contact with any country over the release of the prisoners. They said that they had been “tracking” the Iranians for two months, and that rebel fighters were still verifying their identities.

Tehran has repeatedly denied it has sent any military units to Syria.

Iranian Defence Minister Ahmad Vahidi said on Saturday before the latest abduction was made public that “Iran has no armed forces in Syria and the Syrian government has not made such a request,” according to Iranian state television channel IRIB.

“Syria has a powerful military and also enjoys popular support. The Syrians can handle the adventures that foreigners have created in their country,” Vahidi said.

Hundreds of thousands of Iranians travel each year to Syria to visit a Shia pilgrimage site, the shrine of Sayeda Zainab, in Damascus.

Tehran is the staunchest ally of President Assad, whose forces are locked in a bloody conflict in Damascus and other cities against rebels his regime describes as “terrorists”.

Al Jazeera’s Stefanie Dekker, reporting from Amman, the capital of neighbouring Jordan, said the pilgrims were travelling to the airport after visiting the shrine when they were kidnapped.

Our correspondent said that several reports had emerged from defected Syrian soldiers “that Iranian Revolutionary Guards were present fighting with the Syrian army, but it is difficult to verify or confirm any of these reports.”

Several dozen Iranian pilgrims and engineers were abducted in December and January, with most being released months later.

Earlier in May, 11 Lebanese Shia pilgrims were also kidnapped by an armed group inside Syria.

The group first claimed the pilgrims were member of the Lebanese group, Hezbollah, but then backtracked, claiming to be holding the men until the leader of Hezbollah, Hassan Nasrallah, publicly apologises for voicing support for aAssad.

A local Lebanese television network broadcast a telephone interview with one of the kidnappers who said the pilgrims were in good health and that they were “guests”, not hostages.

It was also revealed that they were being held in the area of Aazaz in Aleppo province. 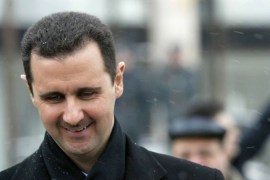 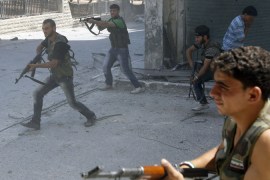 US secretary of state to meet Turkish government over “timely issues” including Syria. 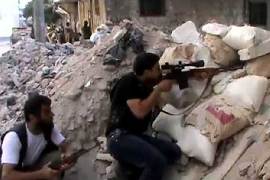 Rebel commander says shelling of Salaheddin district in country’s largest city is “the most violent” since July 20.