South Africa’s justice minister has demanded an explanation after 270 miners were charged with the murder of their colleagues who were shot by police.

Jeff Radebe said the decision “induced a sense of shock, panic and confusion” among South Africans.

“I have requested the acting National Director of Public Prosecutions (NDPP), advocate Nomgcobo Jiba to furnish me with a report explaining the rationale behind such a decision,” Radebe said in a statement.

The decision to charge the miners comes under “common purpose law” used under the former apartheid regime.

The arrested group was initially charged with public violence after 34 striking miners were shot dead in a confrontation with police who were trying to disperse them at the Lonmin platinum mine in Marikana, on August 16.

The violence, which police have said was an act of self-defence, has been described by some analysts as one of the worst displays of state violence since apartheid ended in 1994, sparking a national outcry.

Thursday’s announcement by the National Prosecuting Authority (NPA) that the arrested miners would also face murder and attempted murder charges for the deaths of their colleagues, further fueled public outrage.

National Prosecuting Authority, spokesman Frank Lesenyego, told The Associated Press news agency: “It’s the police who were shooting, but they were under attack by the protesters, who were armed, so today the 270 accused are charged with the murders” of those who were shot.

Constitutional law expert Pierre de Vos said the NPA’s decision to charge the miners on the common purpose doctrine, is bizarre and an abuse of the justice system, reported the country’s national television station, the SABC.

About 3,000 rock-drill operators, represented by the Association of Mineworkers and Construction Union (AMCU), downed their tools on August 10 in an illegal strike, demanding a pay rise.

However, negotiations to end the strike and to agree on a peace accord had apparently been stalled due to a dispute between AMCU and the more established National Union of Mineworkers (NUM).

Al Jazeera’s Tania Page, reporting from the Marikana mine where workers were still striking said that negotiations had ended in an argument on Thursday evening with AMCU pulling out of the discussions.

AMCU said the striking miners’ delegates were being manipulated by the more experienced negotiators there, she said.

This leaves the striking miners with no representation.

On Friday, discussions among Lonmin, unions and the government to end the strike were suspended until Monday due to funerals being held this weekend for those killed, reported the local SABC television station.

Rituals were held for some of the dead before their bodies were taken to their home towns for burial on Friday.

Separately, more than 150 of the arrested miners have filed complaints that they have been beaten up in police cells by officers, the Independent Police Complaints Directorate reported earlier this week.

Gold miner, Gold Fields, also reported on Friday that about 12 000 employees had downed tools in an unlawful strike, apparently over disagreements with organised labour and related structures on its Kloof Driefontein Complex (KDC) mine, reported the local Mining Weekly Online news website.

The company was granted an urgent interdict to bring the unprotected strike at the East section of its KDC mine on South Africa’s West Rand to an end.

Sven Lunsche, spokesperson for the mine said the main issue seemed to be unhappiness with the NUM branch leadership at the mine.

NUM spokesperson Lesiba Seshoka confirmed that the majority of the striking miners were NUM members.

The strike comes after ANC party’s expelled youth leader Julius Malema, speaking at another gold mine on the East Rand on Thursday, called on miners countrywide to make all mines “ungovernable”.

He called Thursday’s charges against the arrested miners “madness”.

“The whole world saw the policemen kill those people,” said Malema, who has made a number of public statements since the incident and has also blamed the government and the country’s president, Jacob Zuma. 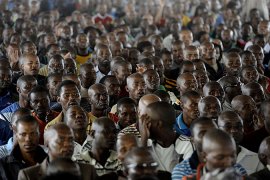 Mood tense as memorial services held for 44 people killed during strike at platinum mine in North West province. 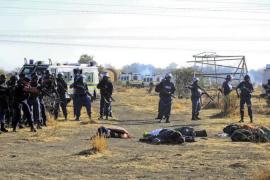