Hundreds of thousands of people were without power across Louisiana’s southern parishes, including more than 250,000 in New Orleans and its suburbs, power provider Entergy reported. Isaac’s centre slowed over the Gulf, whipping winds of 130km per hour (kph) across parts of Florida, Alabama, and Mississippi.

A storm surge also overflowed parts of a 29km levee in rural Plaquemines Parish south of New Orleans, flooding areas and possibly trapping some people in their homes, according to parish officials.

The storm is “very slow moving … which means there could be hurricane-force winds over New Orleans or here in Gulfport, Mississippi … for hours on end,” Al Jazeera’s John Terrett said.

“The biggest test for New Orleans is going to be the city’s brand new pumps and levees and also the big barrier which is about 20km outside the city designed to stop the water getting anywhere near it.

“They’re very confident that all that is going to work this time.”

Oil production in the area has nearly ground to a halt, and ports and coastal refineries curtailed operations as Isaac approached.

The Alliance refinery in Belle Chasse, which is owned by Phillips 66 and produces 247,000 barrels a day, lost power on Tuesday night, the Times Picayune newspaper reported.

But the company said it had already shut the facility down.

The storm has brought high winds, soaking rains and storm surges that will pose the first major test for multibillion-dollar flood protections put in place in New Orleans after Hurricane Katrina devastated the city and coast seven years ago.

“Many parts of the state could see 24 to 38 hours of tropical storm-force winds,” Governor Bobby Jindal told a news conference earlier. “We’re going to see a lot of downed trees and power lines … We need people to stay safe.”

Storm surge flooding is already occurring in coastal areas of southeastern Louisiana, the National Hurricane Centre said in an advisory.

Earlier, the Army Corps of Engineers closed for the first time the massive new floodgate on the largest storm-surge barrier in the world, at Lake Borgne, east of New Orleans.

Isaac is bearing down on New Orleans seven years after the government’s botched handling of the much bigger Hurricane Katrina became a political disaster for President George Bush.

“Isaac has finally formed into a hurricane, so we are officially in the fight and the city of New Orleans is on the
front lines,” Mitch Landrieu, New Orleans mayor, said.

About 50,000 people were set to evacuate the city.

“They are confident that the enhancements to the levee system, particularly the wall that is nearly finished, will protect the entire city of New Orleans from significant damage.”

Obama told people in its path to take the “big storm” seriously and to follow directions in a televised statement from the White House.

“I want to encourage all residents of the Gulf Coast to listen to your local officials and follow their directions, including if they tell you to evacuate,” he said.

His appearance was a reminder of the power of an incumbent president to intervene at politically advantageous moments, as he projected an image of strength and competence, just as Republicans met at their national convention in Tampa, Florida, to nominate former Massachusetts Governor Mitt Romney to challenge Obama in November.

Earlier on Tuesday, Obama said he had ordered the Federal Emergency Management Agency to be in place more than a week ago to co-ordinate with local officials from Puerto Rico to Florida, Louisiana and other Gulf of Mexico states.

“Right now, we already have response teams and supplies ready to help communities in the path of the storm,” he said.

Robert Bentley had ordered residents of low-lying coastal areas and flood-prone areas of Mobile and Baldwin counties to evacuate on Monday.

But he announced on Tuesday that he was revising the order because the National Hurricane Centre lifted its hurricane warning for the Alabama coast.

However, Bentley is still recommending that people in low-lying, flood-prone areas move to safer locations because of heavy rains and storm surge forecast at 1.2 to 2.4 metres. 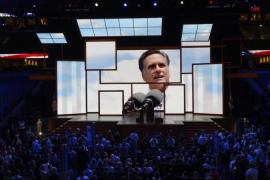 Southern US states brace for ‘Isaac’ to hit

Republican convention in Tampa opens with a recess, as President Barack Obama declares state of emergency in Louisiana. 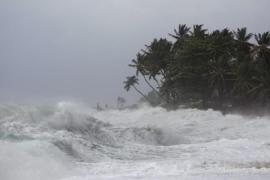 Tropical storm lashes Cuba after sweeping through Haiti, where it caused flooding and at least four deaths.

More than 350,000 earthquake survivors still living in tent cities outside Port-au-Prince are lashed by wind and rain.