A Muslim Sufi leader has been killed in a suicide bomb attack in the Russian republic of Dagestan, according to Russian news agencies.

Said Afandi, a leader of Sufi Muslims in the region, and five of his followers were killed onTuesday night by a female suicide bomber in an attack at Afandi’s home in the village of Chirkei.

There was no immediate claim of responsibility or identification of the bomber, but the attack could be linked to tensions between Sufis and the Wahhabi sect

Afandi was a frequent public critic of Wahhabism.

In July, a senior Muslim religious leader in the republic of Tatarstan was shot dead and the republic’s chief mufti was wounded when a bomb struck his car.

In a visit to Tatarstan on Tuesday, Vladimir Putin, Russian president, presented state awards to the wounded mufti, Ildus Faizov, and relatives of the slain religious leader, Valiullah Yakupov.

Putin called for interethnic harmony and said of extremists: “You cannot defeat a unified, multinational, strong Russian nation because on the side of truth and justice are millions of people who fear nothing, who cannot be intimidated and know the price of peace.”

The killing of Afandi highlighted the violent tensions that persist in Dagestan, even as neighbouring Chechnya has become relatively pacified and orderly after two wars in the last 20 years between separatists and Russian forces.

Clashes with extremists and attacks on police occur almost daily in Dagestan.

Muslim fighters say their strugglle is for a separate Islamic state in the strip of provinces along Russia’s southern border, and they sometimes target mainstream Muslim leaders, who have the backing of regional authorities and Moscow.

Their activities have been mostly contained to the Muslim republics of Chechnya, Dagestan and Ingushetia in the North Caucasus. 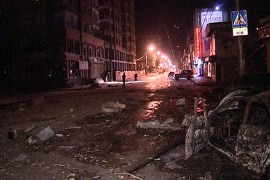 Vehicle being searched explodes, killing one policeman and seven civilians in the North Caucasus’ latest attack. 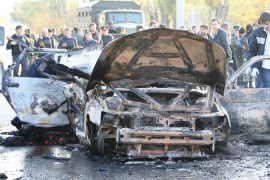 Seven police and four rebels among those killed in the latest bout of violence in Russia’s North Caucasus region. 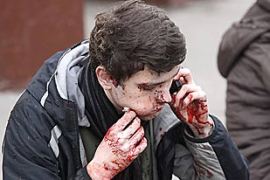 Father says he recognises 28-year-old daughter in pictures said to be of attacker.