Libyan Interior Minister Fawzi Abdelali has said he withdrew his resignation announced two days earlier, amid
criticism over a surge of violence, including destructions of shrines.

“When I submitted my resignation, I thought I would be relieving many people. But it seems that my resignation will further complicate security and I have decided to withdraw it,” Abdelali told a news conference in Tripoli on Tuesday.

Abdelali had resigned on Sunday after coming under fire for the performance of security forces during a surge of violence that has rocked Libya, including attacks on shrines across the country.

“I withdraw my resignation and I am ready to continue my mission,” he added.

Abdelali also criticised what he described as a “ferocious media war” waged against him.

On Sunday, an aide told AFP news agency that Abdelali quit “to protest against congressmen criticising the government and to defend the revolutionaries”, referring to former rebels who now form part of the country’s security services.

That same day the newly elected General National Congress, or national assembly, accused the interior ministry’s High Security Committee of being lax or even implicated in the destruction of shrines, including those of Sufis.

The High Security Committee comprises of former rebels who fought Muammar Gaddafi’s forces last year in the conflict that ended in the dictator’s death last October.

The rebels had taken over security in the country after the fall of Gaddafi’s regime before they were integrated into the ministry of interior’s forces.

Dozens of people took to the streets of Tripoli on Sunday and Monday to protest the violence, which also included double car bombings in Tripoli that killed two people as Muslims celebrated the feast of Eid al-Fitr a week ago.

Islamist hardliners on Saturday bulldozed part of the mausoleum of Al-Shaab Al-Dahman, close to the centre of the Libyan capital.

The demolition came a day after hardliners blew up the mausoleum of Sheikh Abdessalem al-Asmar in Zlitan, 160km east of the capital.

According to witnesses another mausoleum, that of Sheikh Ahmed al-Zarruq, had been destroyed in the port of Misrata, 200km east of Tripoli.

Hardline Sunni Islamists are implacably opposed to the veneration of tombs of revered Muslim figures, saying that such devotion should be reserved for God alone.

The Sufi sect, which practices a mystical form of Islam and has played a historic role in the affairs of Libya, has increasingly found itself in conflict with Qatari- and Saudi-trained Salafist preachers who consider it heretical. 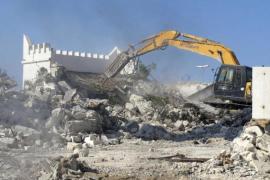 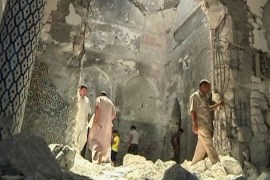