An Israeli court has ruled in a civil case that the Israel army was not at fault in the bulldozer death of American pro-Palestinian activist Rachel Corrie nearly 10 years ago.

Corrie was 23 years old when she went to the town of Rafah in the Gaza Strip as part of a group of activists from the International Solidarity Movement (ISM).

They were acting as human shields to try to stop the Israeli army demolishing Palestinian homes and clearing land around Rafah.

“I reached the conclusion that there was no negligence on the part of the bulldozer driver,” Judge Oded Gershon said, reading out his verdict on Tuesday at the Haifa District Court in northern Israel.

“I reject the suit. There is no justification to demand the state pay any damages.”

The Corries had requested a symbolic $1 in damages and legal expenses.

Gershon said Israeli soldiers had done their utmost to keep people away from the site.

“The deceased put herself into a dangerous situation, she stood in front of a giant bulldozer in a place where the operator could not see her. She did not distance herself as a reasonable person would have done,” he said.

“Her death is the result of an accident she bought upon herself.”

He also said that a 2003 israeli military police investigation – which found Rachel Corrie had been killed by falling earth as a result of her own irresponsible behaviour and which had been criticised by senior US officials – had been properly conducted.

The civil case is the latest in a series brought forward by Rachel Corrie’s parents.

Cindy and Craig Corrie, who once again made the trip to Israel from the US to pursue their case, were upset after the ruling was read out.

“I am hurt,” Cindy Corrie said after the verdict was read.

“We are, of course, deeply saddened and deeply troubled by what we heard today from Judge Oded Gershon.”

Al Jazeera’s Cal Perry, reporting from Haifa, said: “The family are disappointed that there was no criticism at all towards the Israeli army.

“Israel is known for not giving an inch in cases like this at all.”

Corrie was a committed peace activist even before her arrival in the Gaza Strip in 2002.

She arranged peace events in her home town in Washington state and became a volunteer for the ISM.

Pictures taken on the day Corrie died – March 16, 2003 – show her in an orange high-visibility jacket carrying a megaphone and blocking the path of an Israeli military bulldozer.

Witnesses said Corrie was hit by a bulldozer which was razing Palestinian homes.

The army said the operation was needed to deny guerrillas cover.

In its inquiry, the army suggested that the fatal blow came from a falling slab of concrete.Corrie’s death made her a symbol of the uprising.

While her family battled through the courts to establish who was responsible for her killing, her story was dramatised on stage in a dozen countries and told in the book Let Me Stand Alone. 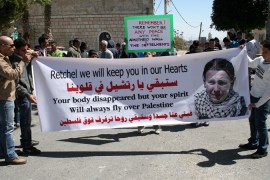 A decade on, some justice for Rachel Corrie’s family?

Whatever the verdict in the Haifa court tomorrow, the case of Rachel Corrie sheds light on the Israeli army’s crimes. 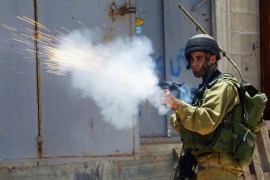 Challenging the Israeli army in court

In 2009, the Israeli military shot US citizen Tristan Anderson in the head with a teargas canister, paralysing him. 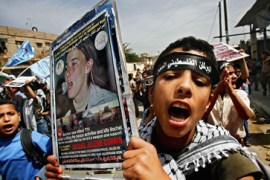 Israel has to defend itself in court for the death of a pro-Palestinian activist. 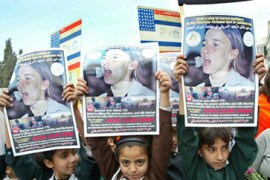