The category-four storm that made landfall on Sunday is one of the fiercest typhoons Japan has seen in years and has also triggered the return of Typhoon Tembin to Taiwan.

A spokesperson from the Japanese Meteorological agency said the strong winds and high waves of up to 13 metres could last until Monday.

“As the typhoon is moving slowly, turbulence in the sea is expected to continue for many hours,” the spokesperson said.

Local news reports claim travel in the region had been ground to a halt, including all flights to and from Naha airport as well as ships connecting to the main island.

Residents have been told to stay indoors while some have evacuated their homes to seek refuge in government buildings and other public facilities.

The typhoon is expected to rip through Okinawa island on Sunday night and move onwards while maintaining its strength.

The agency warned that as much as 500mm of rain could be dumped on the area over the next 24 hours.

To the south of Japan, the island of Taiwan was on alert for the return of Typhoon Tembin just days after the storm submerged the south of the country with people struggling to clear mud-filled homes.

The storm pounded the region with the heaviest rains in more than a century and appeared to be returning towards Pingtung county.

With the typhoon still hundreds of kilometres from the island, officials from Taiwan’s Central Weather Bureau predicted downpours in the south and southeast and warned people to take precautions.

A spokesperson said: “Tembin regained strength and became a typhoon again early this morning. It was moving east-southeasterly.”

The bureau also said threat Tembin was forecast to make landfall again in Pingtung Tuesday morning and move northwards off the east coast.

Tembin had weakened to a tropical storm after moving out to sea the same day, but the Central Weather Bureau confirmed that it had intensified again into a typhoon on Sunday. 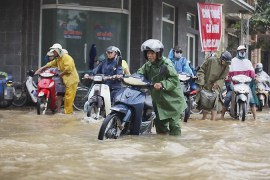 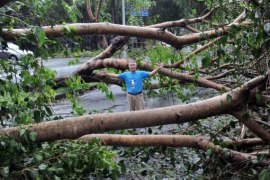 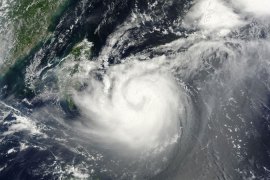 A look at the the impact of Typhoon Tembin on the island of Taiwan.