The number of refugees fleeing the violent uprising against the government of President Bashar al-Assad in Syria has risen beyond 200,000, the United Nations has said.

Even as thousands continue to flee the country, mainly to Turkey, Lebanon and Jordan, government forces on Friday continued their assault on armed rebel positions across the country.

The UN refugee agency said on Friday that the flow of refugees fleeing the fighting had jumped past 202,500.

Jordan’s government said that a record 2,324 Syrian refugees had crossed into that country on Thursday night, while Turkish authorities said more than 3,500 Syrians fleeing the violence had arrived in the country in the past 24 hours.

The new refugees bring the number of Syrians now sheltering in Turkey to more than 78,000.

Al Jazeera’s Sue Turton, reporting from Turkish side of the border in Antakya, said that “it seems like the numbers are growing ever bigger”.

“The flow (of refugees) is increasing, which is really worrying the Turkish authorities,” said Turton, adding that the reason behind this increase is likely the up tick in the aerial bombardments carried out by the Syrian army.

“Many of these families are coming up from towns that have been bombed, moving up to the next town north, towards Turkey, hoping to be able to set up some sort of safe haven there – stay with families or friends. But tjhey’re being bombed there and being pushed up further and further, and their numbers are just increasing as they get closer to Turkey.”

Lebanon, meanwhile, has been rattled by new fighting in the tense northern part of the country, with many painting the conflict there in terms of pro- and anti-Assad factions.

On Friday, a Sunni sheikh was killed in Tripoli, taking the death toll in the last five days to 17.

Meanwhile, warplanes and artillery units have continued to hit the northern Syrian city of Aleppo and several other areas across the country, anti-government rights group has said.

The Syrian Observatory for Human Rights (SOHR), a UK-based group, said that more than a dozen people had been killed in an air and artillery strike in Deir ez-Zor province’s Mayadin that targeted a residential building.

Al-Ikhbariya, a government satellite channel, said security forces were “engaged in combat with an armed terrorist group in the Mayadin region, killing dozens of terrorists”.

The SOHR also reported heavy shelling on several districts of Aleppo, the scene of some of the fiercest fighting in recent weeks. There were also reports of shelling in Damascus suburb of Zabadani.

Fighting was also reported in the Damascus suburb of Daraya, the northwestern province of Idlib and the central province of Hama.

The opposition Syrian National Council has warned of a “humanitarian catastrophe” in Homs, saying it had been under siege for 80 days and was in desperate need of food and medical supplies.

Rebels said they were digging in for a war of attrition in Aleppo, where the government had warned last month of “the mother of all battles”.

Both the government and opposition forces say attacks on Aleppo province are aimed at cutting arms supply routes to the rebels in Syria’s battered second city. 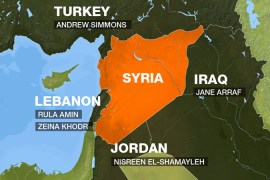 Interactive: The battle for Syria’s borders