A fashion accessories designer, disgruntled over being fired a year ago, has shot a former co-worker dead on a pavement near the Empire State Building in New York City, before being shot and killed by police.

Nine others were hit by gunfire in the confrontation, some possibly fired by the city police, New York Mayor Michael Bloomberg said at a press conference shortly after Friday’s incident.

Those wounded suffered minor injuries and all were expected to survive, police said.

A fire department spokesperson said it received a call about the shooting just after 9am local time (13:00 GMT), and that emergency units were on the scene within minutes.

The shooting set off chaos in the heart of Manhattan at the height of the summer travel season and just after the morning rush hour. Police on their regular anti-terrorism duties in the highly visited area rushed to the scene.

“This was a terrible tragedy,” Bloomberg said. “We are not immune to the national problem of gun violence.”

Police have identified the shooter as 53-year-old Jeffrey Johnson, who lived in Manhattan. His victim was 41 years old. They said they had little details yet about his background, including any criminal record.

After fatally shooting his colleague in the head, Johnson then randomly opened fired on people near the iconic skyscraper before firing on police, witnesses said.

Police Commissioner Ray Kelly said the suspect had been fired about a year ago from his job at Hazan Imports, a business located near the landmark.

The two had traded accusations of harassment when Johnson worked there, he said.

The name of the victim was not released pending notification of the family.

Johnson then walked away, but a construction worker who witnessed the encounter followed him and alerted police, officials said.

Kelly said Johnson, the “disgruntled” worker,  armed with a .45 calibre pistol then turned his gun on police. He apparently fired at officers, but it is not clear how many shots.

The two officers fired a total of 14 rounds, he said.

Federal officials said the shooting was not related to terrorism.

She said a young woman standing next to her fell to the ground after being shot in the hip.

Al Jazeera’s Scott Heidler, reporting from New York, said: “There are varying numbers of how many people were injured by the shooting, eight to 10 people have been reported injured.”

Construction worker Chris Ogden told the Daily News tabloid he was working on a scaffold above one entrance to the building when he saw someone in a suit and carrying a briefcase start shooting.

“He shot the guy in the head,” Ogden told the newspaper. “The guy went down. He took a second shot when he was down.”

Ogden said then casually walked away. “We were screaming from the top, ‘It’s the guy in the grey suit!”’ Ogden said.

“We were just working here and we just heard bang, bang, bang!” said Mohammed Bachchu, 22, a worker at a nearby souvenir shop.

He said he then rushed out and saw seven people lying on the ground, covered in blood.

Resident Rebecca Fox, 27, said she saw people running down the street and at first thought it was a celebrity sighting.

Then she saw a woman shot in the foot and a man dead on the ground.

“I was scared and shocked and literally shaking,” she said.

A body remained at the scene more than an hour after the shooting, according to witnesses. Police scoured the area for bullets.

The Empire State Building, one of New York’s most popular tourist attractions, is a 442-metre skyscraper, which attracts nearly four million visitors a year.

Many others are shoppers drawn to stores along both 34th Street and Fifth Avenue. The shooting occurred at their intersection. Streets around the immediate area remained closed at midday. 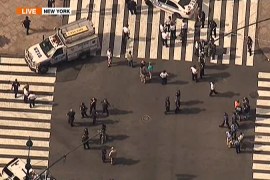 Briefing held after a number of people were wounded and the gunman killed in a shootout near New York city building. 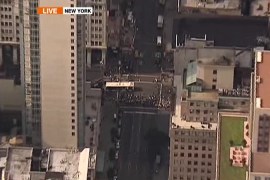