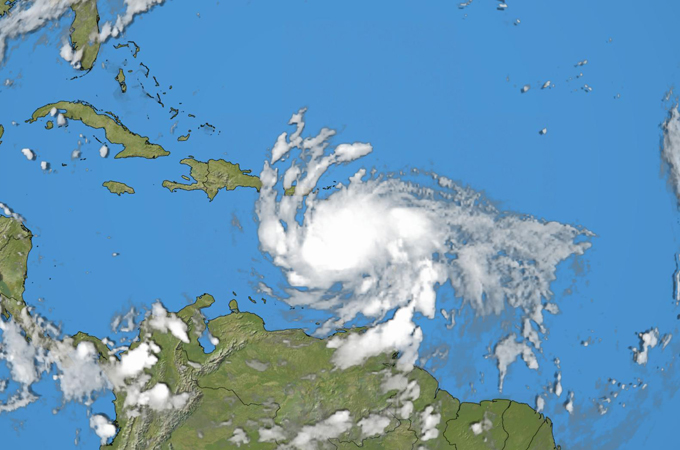 Tropical Storm Isaac is strengthening as it rages towards Haiti, where 400,000 people still live in tented communities [Al Jazeera]

Tropical Storm Isaac is hurtling across the Caribbean, making a bee-line for the island of Hispaniola. The Dominican Republic and Haiti, which share Hispaniola, are currently preparing for the worst.

Isaac has already churned over the tiny Caribbean islands of Guadeloupe, Martinique and Dominica.

Flights were cancelled, and some restaurants were closed, but fortunately Isaac wasn’t particularly powerful when it hit the islands. Generally the winds were under 75 kph, and no more than 80 mm of rain was reported.

Isaac is now heading west. It’s still strengthening and is expected to become a hurricane by the time it makes landfall on Hispaniola.

Although this storm won’t be welcome in either Haiti or the Dominican Republic, the consequences for Haiti are likely to be far more serious than for its neighbour.

Haiti is one of the poorest countries in the world, so has always struggled to cope with the aftermath of natural disasters. Deforestation has made Haiti highly vulnerable to landslides and flash flooding, and since the earthquake of 2010, the situation is even more serious.

The earthquake devastated Port-au-Prince and led to the death of tens of thousands of people. Immediately after the quake, it’s estimated that 1.5 million people were housed in impromptu settlements.

Even 31 months later, it’s estimated that 400,000 Haitians are still without homes, living in tented communities across the hillsides of Port-au-Prince.

Isaac is forecast to hit Hispaniola at approximately 12 GMT on Friday, and is expected to deliver between 300 and 500 mm of rain.

If this storm follows the forecast, then it will cause widespread flooding and potentially landslides as well. This will be hazardous to anyone in the country, and tarpaulins will provide little, if any, protection.