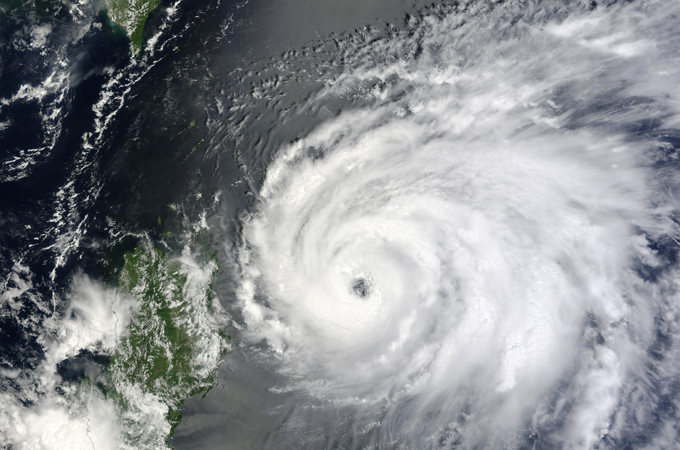 Typhoon Tembin has already brought landslides and flooding to the northwest of Luzon, now it is powering towards Taiwan [NASA]

Fourteen storms have already moved through the western Pacific this year, but we may not have seen the strongest ones yet.

In the next two weeks, two separate storms are already putting countries on alert.

First there is Typhoon Tembin. In just over two days this storm grew from a tropical depression to a typhoon with winds greater than 200kph.

While Tembin was strengthening on Sunday, heavy showers from its outer feeder bands moved across Luzon and were responsible for at least one flood related death and landslides. However, this may only be the preshow compared to what Taiwan could see on Thursday.

Tembin has weakened a little since its maximum intensity, but as of 9 GMT on Wednesday, the storm was packing winds of over 167kph, with gusts over 200kph. This would still be the equivalent of a category two hurricane.

The winds of this storm have the potential to cause significant damage when it makes landfall in Taiwan around 12 GMT on Thursday, but the main problem will be the amount of rain. The system is moving very slowly, around 10kph, meaning the rain will remain heavy over the island for an elongated period of time. Flooding and landslides are highly likely.

Earlier this month, Typhoon Saola made a similar landfall on Taiwan.

Sustained winds with this storm were weaker, but Taiwan picked up more than 1,500mm of rain, making it the fifth wettest storm in the country’s history.

After Typhoon Tembin re-emerges into the Taiwan Strait, it will then be southeastern China that is likely to see a second landfall on Friday.

Behind Tembin is Tropical Storm Bolaven. While only a “fish” storm at the moment, this tropical cyclone cannot be underestimated. All of the ingredients are there to possibly make this the strongest typhoon of the season.

In the short term, Bolaven is expected to strengthen into a typhoon in the next few days while continuing its track to the northwest.

It is not until next week that the danger could really begin. After moving into the East China Sea early next week, several of the forecast models are in fairly good agreement that Bolaven will strengthen dramatically and then move north.

Eastern China, South Korea and North Korea are all areas that have had above average rainfall and flooding this year. Now with Bolaven on the radar, the damage from this potentially powerful storm could be catastrophic.