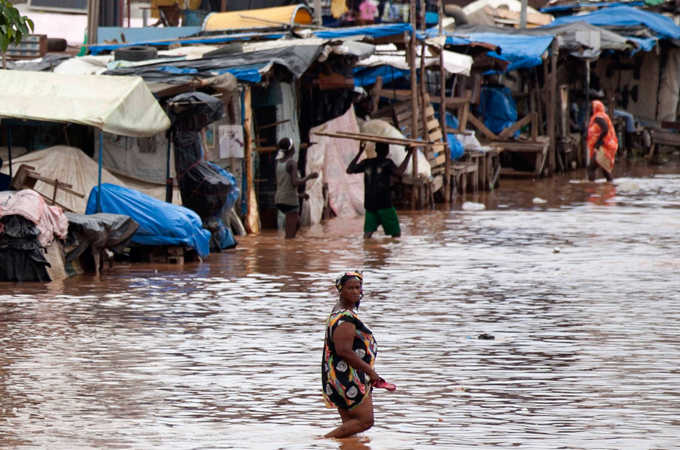 In the last few weeks, Senegal, Nigeria and Niger have all seen flooding, which have submerged many neighbourhoods. [REUTERS]

At least 31 people have been killed after torrential rains lashed Niger. Almost 100,000 more people are homeless.

President Mahamadou Issou pledged 1,400 tonnes of food and $1.1 million in aid, but admitted it would not be enough.

Niger is one of the countries which rely on the West African Monsoon for its rainfall.

This Monsoon spreads northwards from the Gulf of Guinea in June, then retreats again in September and October.

It brings essential rainfall to the region, and for some countries, including Niger, it is virtually the only source of rain.

If the monsoon fails, then so will the crops. Last year the rains were late and erratic, causing crops to fail in a massive swathe of eight countries. Millions of people are already going hungry, and there are concerns that this year’s flooding will only make matter worse.

The rains are usually heaviest in the south of Niger, close to the border with Nigeria. Generally the rains decrease towards the north. The rate that they decrease is staggering: in just 300km, the drop in rainfall is as much as 75%.

This year, excessive rains which have been falling since mid-July have brought flooding to all regions of the country, but the southern Dosso region is one of the worst affected. In this region alone, nearly 70,000 have had to be evacuated and three people have lost their lives.

Niger is not the first country to have been hit by flooding in West Africa this year. Nigeria and Senegal had also been swamped with rain, just one week earlier.

The monsoon will slowly begin to retreat in the next few weeks, but as always, the amount of rain it brings will continue to be scrutinized for many months to come.