Lonmin, the British mining company, has relaxed an ultimatum for workers at its platinum mine in Marikana in South Africa to return to work on Tuesday, saying that dismissals would not help ease tensions.

The announcement came as South Africa mourned 44 deaths around the strike-bound mine, including 34 miners shot dead by police.

“I don’t think it’s going to contribute to a more stable environment if Lonmin goes out and puts deadlines and ultimatums and says we will fire everyone if no one comes to work,” Mark Munroe, a Lonmin executive, said.

In a statement on Monday, Lonmin said: “After consultations with various labour representatives today, the company [Lonmin] can also announce that those illegal strikers who did not return to work this morning will not be dismissed and have been allowed an extra day in light of current circumstances.”

A spokesman for South Africa’s president said ministers had convinced mine managers that there should be no
firings of striking miners during this week.

Harold Maloka said the agreement came at Monday’s meeting after Lonmin officials had given striking rock drill operators until 7am on Tuesday to report for work or face dismissal.

Lonmin had initially ordered miners to return to work by Friday. After the shootings, the mine changed the deadline to Monday and then Tuesday.

Lonmin, one of the world’s largest primary producers of platinum, said that almost one-third of the 28,000-strong workforce reported for their morning shifts, adhering to the company’s initial deadline.

The company has been able to resume partial operations.

The violence erupted when police opened fire on striking miners who were demanding a 300 per cent pay rise. Police said they acted in sef-defence as the miners were armed and tried to attack them. 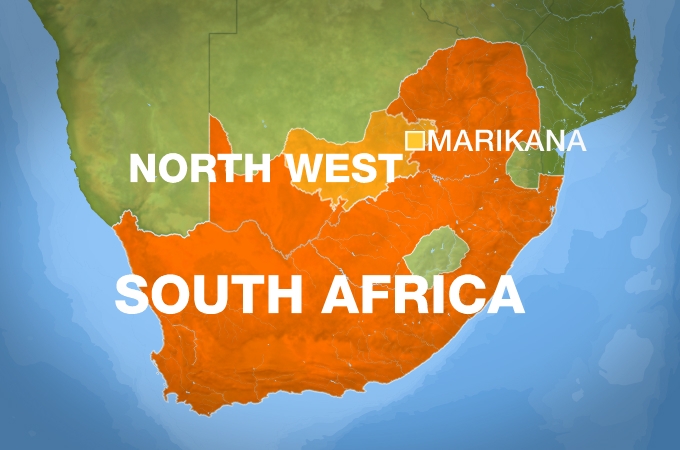 The shooting has been described by some analysts as one of the worst displays of state violence since apartheid ended in 1994.

Meanwhile, 259 miners arrested after the police crackdown appeared in the Ga-Rankuwa court in Pretoria on Monday on charges ranging from murder to public violence.

Magistrate Esau Bodigelo ruled that all the men should remain in custody, but an exact breakdown of all the charges was not immediately available, local news reports stated.

Al Jazeera’s Haru Mutasa, reporting from Wonderkop in Johannesburg, said the larger National Union of Mineworkers (NUM) and the newer AMCU union were locked in a dispute over the action and cannot agree on a way forward.

“Expecting us to go back to work is like an insult … many of our friends and colleagues are dead,” another miner, who did not want to be identified told the Associated Press news agency.

“They are threatening to return to the hill top and to camp out there until their demands are met,” said our correspondent, adding that safety remained a major concern for workers who returned to work.

Intimidation and threats of violence reportedly kept many more away, she said.

“The safety and security of our employees is paramount and nobody will be asked to report for duty if the police consider them in danger of reprisals,” Scott said in a statement.

Speaking to Al Jazeera, Scott said: “From a public order perspective the South African Police Services present in the area is still significant. One of the ways that people see of order being restored is to get work continuing.”