A Chinese politician’s wife who confessed to killing a British businessman is due to hear the verdict in her murder trial.

The conclusion of Gu Kailai’s trial on Monday will be a step toward closing a scandal that has rocked the Chinese leadership at a sensitive time, just months before it will hand over power to younger leaders.

State media says Gu has confessed to intentional murder, for which the penalty ranges from 10 years in prison to death.

Some political and legal analysts believe Communist Party leaders may have decided against a death penalty for fear it could incite public sympathy for her.

One option is a suspended death sentence that can be commuted later to a long prison term.

Even after the verdict is announced, questions will remain over the fate of Gu’s husband, Bo Xilai, a member of China’s politburo, who was dismissed in March as party secretary of the city of Chongqing. The party says Bo was removed due to unspecified violations.

Gu is accused of killing Neil Heywood, a former Bo family associate, after a dispute over money.

State media also claim Heywood threatened her son. A family aide has been charged as an accessory.

If Gu becomes a target of sympathy, the scandal that has embarrassed China’s government could drag on.

“If you execute her, what about Bo Xilai? You should also execute Bo Xilai, because when the story becomes fully known, it’s highly likely that people will think that she was just a scapegoat for the whole thing,” said Cheng Li, an expert in Chinese politics at the Brookings Institution in Washington.

“Then if you want to put Bo Xilai on the death penalty, that’s a really, really dangerous thing.”

No senior leader has been sentenced to death in recent decades, and having a party-controlled court impose such a penalty could open the door to its use in future power struggles.

The family aide, Zhang Xiaojun, is expected to receive a lighter penalty.

Francois Godement, a China politics expert at the European Council on Foreign Relations, said there were other factors in Gu’s favour, with state media saying she has confessed and a claim that she acted to defend her son after threats by Heywood.

He Weifang, a legal scholar at Peking University, said he expected Gu’s sentence to be somewhere between 15 years in jail and the death sentence with a reprieve.

He cited Gu’s status as the wife of a senior leader whose fate remains unclear, even though many believe his political career to be over.

“Immediate execution is very unlikely. Not all intentional homicide cases result in death sentences,” He said.

“Everyone also still takes into consideration her special background … in China, it’s impossible to make sure that everyone is equal before the law.”

Gu’s arrest and the ousting of her husband sparked the biggest political turbulence in China since the bloody crackdown on the Tiananmen Square pro-democracy protests in 1989.

The official Xinhua News Agency has depicted Gu as a depressed woman on medication who turned into a murderer after Heywood threatened the safety of her son, Bo Guagua.

Gu is accused of luring the victim to a Chongqing hotel, getting him drunk, then pouring cyanide into his mouth. 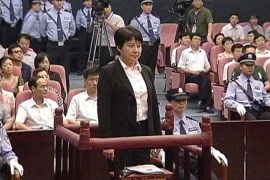 Gu Kailai says threats made against her son led to murder of British businessman Neil Heywood in November. 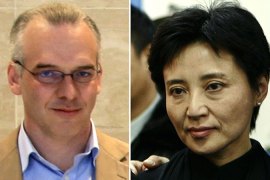