Half of the US city of Dallas has been sprayed with aerial insecticide in a bid to contain an outbreak of a mosquito-borne virus that has claimed the lives of 17 people in the state of Texas this year.

The spraying, resuming on Friday night, came after Mike Rawlings, the city’s mayor, declared a state of emergency to prevent more infection cases.

There have been more cases of West Nile virus reported so far this year than any year since the disease was first
detected in the United States in 1999, the Centers for Disease Control (CDC) said on its website.

Nearly half of the 693 human cases of the virus infections reported this year to the Atlanta-based CDC have been in Texas.

Residents have been urged to use insect repellent and avoid going out at dusk and dawn.

Aerial spraying also is being used elsewhere, including in neighbourhoods in New York City and Sacramento, California, to combat the spread of West Nile virus.

Officials say spraying is the most effective way to fight the mosquitoes that carry the disease despite safety concerns about exposing people to chemical pesticides.

West Nile virus usually flares up in summer because it is most often transmitted by mosquito bites. People infected can have fever and aches that can become severe or even cause death, especially of the elderly and children. There is no specific treatment for West Nile infection.

Factors such as weather, numbers of mosquitoes and human behaviour contribute to when and where outbreaks happen.

There have been cases of infection reported in people and birds in 42 US states, with 80 per cent of the cases in Texas, Mississippi and Oklahoma.

David Sanders, an expert on the West Nile virus at Purdue University in the US state of Indiana, told Al Jazeera the outbreak is “a major concern”.

“We had an extremely mild winter so that probably didn’t reduce the mosquito populations as they tend to get reduced during the winter season, so that’s probably a contribution,” he said.

The virus was first discovered in 1937 in Uganda. It is carried by birds and spread to humans by mosquitoes. 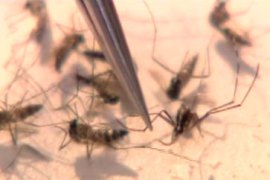 Chikungunya, a disease which causes intense pain, has killed 300 people on Reunion. 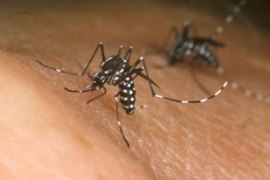 A new form of mosquito carrying the parasite responsible for the most deadly form of malaria has been discovered in a village in southern Cameroon, researchers say.