Expelled politician Julius Malema has called for the resignation of South Africa’s President Jacob Zuma after 34 miners were killed this week when police opened fire on them in the course of a protest.

“The Minister of Police must step down because this massacre was committed under his supervision, the same
thing with President Zuma, He must step down,” said Malema, as thousands continued to protest in Marikana on Saturday.

“A responsible president says to the police you must keep order, but please act with restraint. He says to them use maximum force. He has presided over the killing of our people, and therefore he must step down. Not even apartheid government killed some many people,” said Malema. the former youth leader of the governing African National Congress.

He arrived as family members continued to hunt for loved ones missing since Thursday’s shootings. Women said they did not know if their husbands and sons were among the dead, or among the 78 wounded or some 256 arrested by police on charges from public violence to murder.

“They had no right to shoot,” Malema said of the police, even if the miners had opened fire first.

Malema is the first politician to address the miners at the site during a more than weeklong saga in which 10 people were killed before Thursday’s shootings – including two police officers butchered to death and two mine security guards whom strikers burned alive in their vehicle.

He said he had come because the government had turned its back on the strikers.

Malema, who was forced out in April from sowing divisions in President Jacob Zuma’s African National Congress party, charged some top-ranking ANC members had shares in the Lonmin PLC platinum mine and implied that they had no interest in seeing miners earn higher wages.

Strikers complained earlier that Zuma had not come to hear their side of the story when he flew to the Marikana platinum mine on Friday, cutting short his part in a regional summit in neighbouring Mozambique so that he could visit wounded miners in the hospital.

“We have to uncover the truth about what happened here. In this regard, I’ve decided to institute a commission of inquiry. The inquiry will enable us to get to the real cause of the incident and to derive the necessary lessons, too,” he said on Friday.

“It is clear there is something serious behind these happenings and that’s why I have taken a decision to establish the commission because we must get to the truth,” Zuma said.

“This is a shocking thing. We do not know where it comes from and we have to address it.”

South Africans are in shock over the killings. The police said they acted to save their lives after a group of miners armed mainly with machetes and clubs charged at them, and at least one miner shot at them.

Police responded with volleys of automatic gunfire and pistols.

In a statement, the South African Police Service said its officers were “viciously attacked by the group, using a variety of weapons, including firearms. The police, in order to protect their own lives and in self-defence, were forced to engage the group with force”.

The White House said the US was “saddened” by the deaths and expressed confidence in the government probe.

“We note President Zuma’s statement of shock and dismay and the remarks of other South African officials on these events and their efforts to resolve the situation without further bloodshed,” White House deputy press secretary Josh Earnest told reporters.

“We are confident that the South African government will investigate the facts around this case and, as always, we encourage all parties to work together to resolve the situation peacefully.”

In a front page editorial, The Sowetan newspaper questioned what had changed since 1994.

“It has happened in this country before where the apartheid regime treated black people like objects,” the paper said. “It is continuing in a different guise now.”

The Lonmin miners live in corrugated iron shacks without running water or electricity. People like the strikers ask why their government, running Africa’s richest nation, has not been able to improve their lot nearly 20 years after the ouster of apartheid.

The Sowetan reported on Thursday that police officers earlier said that negotiations with leaders of rival labour union Association of Mineworkers and Construction Union (AMCU) had broken down, leaving no option but to disperse strikers by force.

“Today is unfortunately D-day,” Dennis Adriao, a police spokesman, was quoted as saying on Thursday.

While the initial walkout and protest focused on wages, the ensuing violence has been fuelled by the struggles between the dominant National Union of Mineworkers (NUM) and the upstart and more radical AMCU.

Disputes between the two unions escalated into violence earlier this year at another mine.

The unrest at the Lonmin mine began on August 10, as about 3,000 workers walked off the job over pay in what management described as an illegal strike.

Before Thursday’s shooting, the protests and ensuing violence had killed at least 10 people in Marikana, including two police officers.

It has also drastically affected production at the mine. 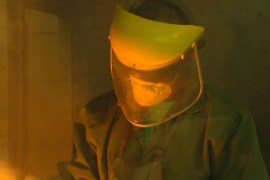 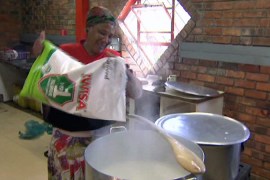 Drought and weakening currency mean staple food of millions now costs 40 per cent more than it did last year. 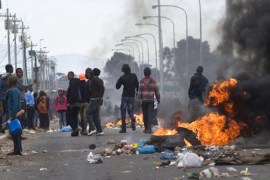 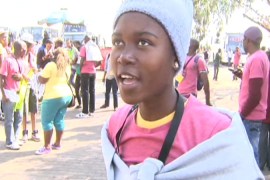 Hundreds of students rally in Johannesburg as lack of basic resources in schools is deepening inequality in education.