Tropical Storm Kai-Tak has strengthened into a typhoon and is sweeping across the South China Sea towards southern China after devastating parts of the Philippines.

The storm edged away from the Philippines on Thursday, offering some relief for millions of people struggling to recover from a brutal few weeks of monsoon rains that claimed more than 100 lives.

But along the South China coast, residents braced themselves as Kai-Tak continued to intensify.

“We are starting to get gusts of wind, the strongest winds are expected during the overnight hours. That’s when we can expect damage and also possibly disruption to flights and so on. And after that comes the rain.

“We have already seen the damage that [the storm] has done in the Philippines. We are expecting extensive flooding along the South China coast,” he added.

“The storm is gone but we’re still on red alert. In 10 hours we’d know how much water would descend onto the Cagayan river,” Ramos told the AFP news agency on Thursday.

Kai-Tak swept across the Philippines’ main island of Luzon on Wednesday, dumping heavy rain on the Cagayan basin and other areas in the north, leading to the deaths of four people.

The storm also caused more bad weather in other parts of Luzon, including the country’s capital Manila and surrounding farming regions where an intense deluge triggered by another storm caused devastating floods last week.

Those floods, which came after nearly a fortnight of relentless rain that soaked the ground and filled rivers, killed at least 105 people, according to the government’s latest tally.

The government’s National Disaster Risk Reduction and Management Council said it was still providing relief aid to nearly a million people impacted by last week’s floods, including more than 216,000 at evacuation centres.

Among the worst-hit areas on Wednesday were four small northern farming towns, where water reached neck-deep in some areas and landslides cut off a major highway, said Melchito Castro, civil defence chief in the region.

Floods that persisted in the farming provinces surrounding Manila had started to recede, and the number of people in evacuation centres was about half the peak over the weekend.

Ramos said he expected most people would be able to return to their flood-damaged homes within a week.

However, he said more than 12,000 families, or about 60,000 people, had lost their homes completely and would need temporary shelters for a longer period.

Anna Lindenfors, country head for aid group Save the Children, warned that the millions of people affected by the floods faced months of miserable and dangerous conditions either inside or outside evacuation centres.

“The need is massive and urgent – millions of people are suffering the miserable consequences of these floods and we must try to reach them before the rains hit again,” she said in a statement. 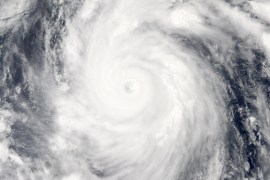 Is there a difference between a typhoon, a cyclone and a hurricane? 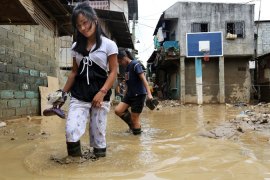 Philippines braced for another battering

The clean-up operation is underway but yet more rain is on its way thanks to another tropical storm.