Several Gulf Arab states have told their citizens to leave Lebanon immediately, after armed men kidnapped more than 20 people in retaliation for the capture of one of their kinsmen in Syria.

The Meqdad clan, one of Lebanon’s powerful Shia Muslim families, said its military wing kidnapped 23 people on Wednesday in a bid to secure the release of Hassan al-Meqdad. The clan said it would kill all the hostages if he was not set free.

Saudi Arabia, the United Arab Emirates, Kuwait, Bahrain and Qatar told their citizens to leave Lebanon after the kidnappings and threats to seize more citizens of countries that have backed the uprising against Syria’s President Bashar al-Assad.

The Meqdad clan says it is seeking to put pressure on the Free Syrian Army (FSA) to release Hassan al-Meqdad by targeting both Syrians it says are part of the rebel force and citizens of Turkey, one of the rebels’ regional sponsors.

The clan is holding one Turk and the rest of its captives are Syrians. But Maher al-Meqdad, spokesman for the clan, said the number of Turkish captives “was likely to rise”.

“If Hassan is killed, the first hostage we will kill is the Turk,” Maher al-Meqdad said.

“Regarding Saudis, Qataris and Gulf nationals, they are not targets for the Meqdad clan.”

The kidnappings led to demonstrations in Lebanon, with protesters briefly blocking Beirut’s main highway to the airport on Wednesday. Passengers were forced to walk to the airport terminal, and some flights were temporarily disrupted.

Abu Ali al-Meqdad, a Meqdad clan member, said on Wednesday the hostages “were kidnapped because a member of our family was taken the day before yesterday in Syria”.

According to local media reports, Abu Ali said that the Meqdad family was working closely with other families in the region, and would reveal a “big catch” on Thursday.

Arab television reports said a Syrian rebel group claimed it had kidnapped Hassan al-Meqdad on Monday, accusing him of being a sniper and a member of Hezbollah.

They claimed he had been sent to Syria by Hezbollah to aid Assad. Hezbollah has been one of Assad’s regional allies for decades.

Maher al-Meqdad said his kinsman had travelled to Syria more than a year and a half ago, before the outbreak of the uprising, and had no links to the fighting in Syria.

“He is neither a sniper nor a member of Hezbollah,” Abu Ali said. “All the accusations are a lie … our demand is not political, this is a humanitarian issue.”

Hezbollah spoke out on Tuesday and denied Hassan al-Meqdad was a member of the party.

In remarks to Lebanon’s National News Agency, Hassan al-Meqdad’s brother Hatem said “the snowball would grow”, and gave warning to “Qatar, Saudi Arabia and Turkey and their citizens”.

“We do not take part in any harassment of innocent Syrians, but any supporter of the Free Syrian Army is a legitimate target for us,” Hatem al-Meqdad said to a local Lebanese channel on Wednesday.

“Tomorrow the number may rise to 50, because it is the only way to save the life of Hassan,” he said. “And those who ordered his kidnapping will pay dearly.”

Saudi Arabia ordered its citizens to leave Lebanon “immediately”, the state news agency reported in an SMS alert on Wednesday.

A diplomat said the Turkish businessman was kidnapped shortly after arriving in Lebanon earlier on Wednesday.

“He was here for business, arrived today, and was kidnapped near the airport,” the source said, adding that there was little progress so far in negotiations to secure his release.

The Lebanese news channel Al Jadeed was given access to the Turkish hostage, who said he had been treated well.

In a video broadcast by Al Mayadeen, a Lebanon-based TV station, two of the Syrian hostages were shown in the custody of masked gunmen from the Meqdad clan wearing green fatigues and armed with automatic rifles.

Clan spokesman Maher al-Meqdad said the detained Syrians included a lieutenant who had deserted Assad’s army to join the rebels, while those who were not FSA members had been freed.

One of the detainees, shown looking tense in a room full of armed men, identified himself as a captain by the name of Mohammed, and said his role was to help supply the FSA. The other man said he was his assistant.

“This is not an appropriate way to solve the kidnapping of a Lebanese citizen in Syria and brings us back to the days of the painful war, a page that Lebanese citizens have been trying to turn,” he said in a statement.

Syria’s main opposition coalition condemned the kidnappings, as Syrians seeking refuge in Lebanon from violence in their country expressed fears over Wednesday’s incidents.

Violence in neighbouring Syria has spilled over into Lebanon in the form of cross-border shootings, shelling by the Syrian army, tit-for-tat kidnappings and sectarian clashes between groups which are divided over the revolt. 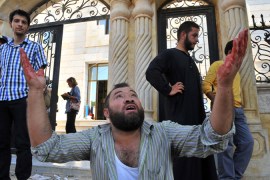 Children among dozens dead in Azaz, 45km north of Aleppo, after attacks reduce a row of residential homes to rubble. 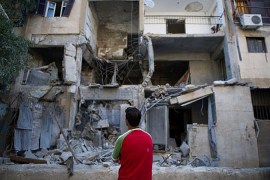 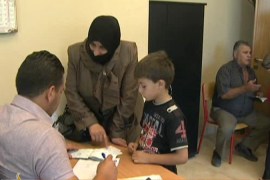 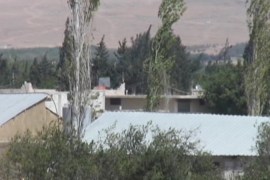