A report issued by a team of United Nations human rights investigators said that Syrian government forces and allied militias have committed war crimes, including murder and torture, in what they say appears to be state-directed policy.

The investigators said in a report released on Wednesday that they had received “consistent evidence that mid- and high-ranking members of government forces were directly involved in illegal acts”.

“Defectors stated that commanders ordered their subordinates to shoot civilians and ‘hors de combat’ fighters, and to torture and mistreat detainees. Orders were often enforced at gunpoint and anyone hesitating to comply risked arrest or summary execution,” the report said.

Although the report also accused Syrian rebels fighting to topple President Bashar al-Assad of committing war crimes, they “did not reach the gravity, frequency and scale” of those carried out by the army and security forces, the investigators said.

The independent investigators, led by Brazilian Paulo Pinheiro, conducted more than 1,000 interviews, mainly with Syrian refugees or defectors who have fled to neighbouring countries, over the past year to produce their latest 102-page report to the UN Human Rights Council.

They found “reasonable grounds” to affirm that government forces and the allied shabiha militia had committed crimes against humanity, war crimes and gross violations of international human rights and humanitarian law.

The report called for the UN Security Council to take “appropriate action” given the gravity of documented violations by all sides.

“What happened on the government side appears to be a policy of the state. It is not just widespread but similar large-scale complex operations, how they are carried out, the way the military and security work together,” Karen Abu Zayd, a senior US investigator and former head of the UN agency helping Palestinian refugees, told Reuters in a telephone interview.

The Security Council can refer a case to a prosecutor of the International Criminal Court, a UN tribunal, but Russia and China, which have veto power, have not condemned the Syrian government’s actions.

Both government forces and armed insurgents had displayed “more brutal tactics and new military capabilities” as fighting escalated during the 17-month conflict, the report said.

Each side had violated children’s rights during the conflict, it said. At least 125 youths under age 18, mainly boys, had been killed since February, while others were arbitrarily arrested.

“Children described having been beaten, whipped with electrical cables, burned with cigarettes and subjected to electrical shocks to the genitals,” the investigators said of those in the custody of state forces.

“Our assessment at the end of March was that a million people needed help,” she told the BBC, adding that the number may now be as high as 2.5 million people in need of aid in Syria.

That number includes thousands who have taken up shelter in schools, public buildings and private residences, according to aid officials and activists.

“I visited a number of schools right here in Damascus, which are housing people who have been displaced. Many of them have lost their homes,” Amos said.

“Schools restart in September. It’s not clear where they will go so that the children can actually restart their education.”

She emphasised that the UN agencies in Syria and their local partners could not handle the humanitarian crisis alone, and that she would continue to lobby the government to allow in more aid workers and organisations.

Amos, who is due to hold a news conference in Damascus on Thursday before heading to Lebanon, also urged the government and the rebels to end the conflict and to allow aid workers to move freely.

“We have to be able to get to everyone wherever they are,” she said. “I hope the government and the opposition recognise that and allow us to get on with our job.”

In addition to those displaced within Syria, the UN says at least 157,600 people have fled to neighbouring countries, based on those registered, while there are reports that many in conflict zones are suffering shortages of food, power and medical supplies. 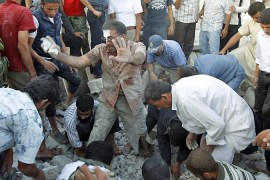 Dozens of people, including children, reported killed by air strikes on rebel-held Azaz town some 45km north of Aleppo. 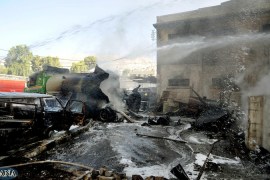 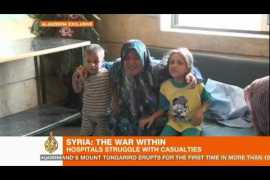 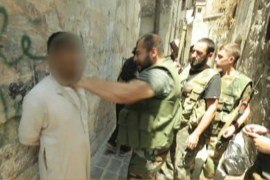 Men suspected of being Assad’s informers in Syria’s second city get heavy-handed treatment at FSA hands.