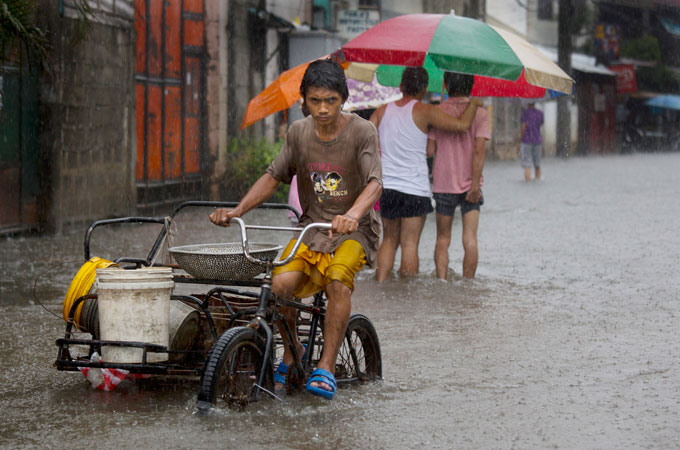 This year’s monsoon rains are regarded as the worst since 2009, when almost 500 people lost their lives. [GALLO/GETTY]

The northern Philippine island of Luzon is, once again, bracing itself for the possibility of further flooding. This comes after more than two weeks of rain has already resulted in excess of 60 deaths.

The monsoon rains are regarded as the worst since 2009 when more almost 500 people died after torrential rain from Typhoon Ketsana caused widespread flooding.

The capital city of Manila had been left reeling from exceptional downpours from Typhoon Saola but the rain has now continued, albeit intermittently, for two weeks. Between August 7 and 10, Manila recorded a staggering 852mm of rain, which is almost double the average rainfall for the whole month.

The rain caused the dams and rivers which criss-cross Manila to overflow and more than 1.2 million of the city’s residents have been affected. At one point more than half of the metropolis was under water and schools and offices were closed for several days.

Although emergency centres were set up, the government has admitted it has struggled to cope with the scale of the disaster. Whilst more than 330,000 people remain in emergency shelters, others have been keen to return to their homes but the floodwater and mud which has confronted them has made some reconsider that decision.

Over the next 48 to 72 hours Tropical Storm Kai-tak is expected to brush past the northern coastal region of Luzon, bringing another 250mm of rain. It is also likely that the winds blowing around this cyclone will draw in more moist air from the South China Sea. This will result in the prospect of similar rainfall totals to a much larger area including along the west coast of Luzon, as far south as Manila.

Kai-tak is then expected to head through the Luzon Strait and may threaten heavy rain across Taiwan before reaching the coast of mainland China, east of Hong Kong, during Thursday.