Egypt’s President Mohamed Morsi has emerged empowered after a “revolutionary” decision to dismiss his powerful defence minister and curb the military’s sweeping powers, the country’s media has said.

In a surprise move on Sunday, Morsi retired the powerful defence minister, Field Marshal Tantawi, 76, and armed forces chief of staff Sami Anan, and scrapped a constitutional document that gave the military legislative and other powers.

The state-run Al-Akhbar newspaper said the dismissal of Tantawi, who headed the Supreme Council of the Armed Forces (SCAF) for more than a year after massive streets protests forced Mubarak to step down, was a “revolutionary decision”.

“The Brothers officially in power,” declared the independent Al-Watan daily, referring to the Muslim Brotherhood, the Islamist group which backs Morsi and through whose ranks he rose before his election triumph.

However, not all media welcomed the move, in Cairo, the independent daily Al-Shorouk expressed concern over the action, saying it meant that Morsi was accumulating “much bigger prerogatives than those of Mubarak”.

Others mocked Tantawi’s departure, presented officially as a retirement. “Marshal, tell the truth, did Morsi fire you?” they said.

In a late night speech on Sunday, Morsi denied trying to marginalise the army, saying he was acting in the interests of the country.

“I never intended, through my decisions, to marginalise or be unjust toward anyone, but rather to act so that we advance toward a better future, with a new generation, long-awaited new blood,” he said.

“I did not intend to embarrass institutions,” he added, saying he had “the interest of the country in mind”.

Morsi also amended the interim constitution to deny the military any role in public policymaking, the budget and legislation, and the right to pick a constituent assembly drafting a permanent constitution for post-Mubarak Egypt.

“The president has decided to annul the constitutional declaration adopted on June 17” by the SCAF, Morsi’s spokesman Youssef Ali said.

Mustafa al-Najar, former member of the dissolved Egyptian parliament, said Morsi’s move was a huge step in the transition towards democracy.

“There are no risks of either rough, nor smooth (future) military coups against the Egyptian president, as some people used to believe, al-Najar said.

“The scene has been finalised by introducing a satisfactory settlement for many parties. We have accomplished the greater part of the transitional period that will be concluded by drafting the constitution.”

“But I guess the talk about all of this is emanating from the fact that this was such a surprising and bold move.

“Morsi who did not want to defy the military initially, seized on the opportunity of the border attack to end the political career of one of the longest serving military men in the country.”

Sixteen guards were killed and others wounded in the attack by fighters on a police station in the Sinai peninsula near the border with Israel on August 5.

The president sacked two senior generals and the intelligence chief after the attack.

Mourad Ali, a senior official with the Brotherhood’s Freedom and Justice Party, which fielded Morsi in the May-June presidential polls, praised the president.

“Given the circumstances, this is the right time to make changes in the military institution,” the official said. “He is a strong president, and he is exercising his authority.”

Sunday’s announcements marked a new twist in uneasy ties between Morsi and the army, testing the balance of power between the first civilian president in Egypt’s history and a military that had moved to limit his power.

Tantawi, who had served as Mubarak’s defence minister for two decades, was replaced by replaced by Abdel Fattah al-Sissi, a member of the SCAF.

The field marshal, as well as chief of staff Anan, were awarded the Greatest Nile Collar, Egypt’s most prestigious award, and both were retained as presidential advisors.

But Morsi also shuffled members of the SCAF into other strategic public sector jobs, Vice Admiral Mohab Mamish, the head of the navy, was tasked with overseeing the Suez Canal Authority, a key generator of revenues.

Morsi also appointed judge Mahmud Mekki as his deputy, MENA reported, making him only the second vice-president to be named in Egypt in 30 years.

In Israel, a government official expressed “great concern” over developments in Egypt while Israeli media suggested the removal of figures such as Tantawi would force Israel to seek new interlocutors in Egypt.

“The change of security and military leadership in Egypt will require Israel to open channels of dialogue with the new figures, not all of whom are familiar faces,” an analysis in Tel Aviv’s Maariv newspaper said.

Israel and Egypt signed a peace treaty in 1979, and although ties were frosty, security co-operation between the two countries’ armies remained solid.

“It is too early to say what will happen because everything is evolving in Egypt, but we are following what is happening there with great concern,” an Israeli official told AFP news agency. 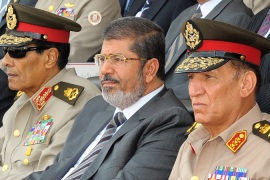 President Morsi’s sacking of his defence minister propels the Egyptian revolution into a new, pivotal phase. 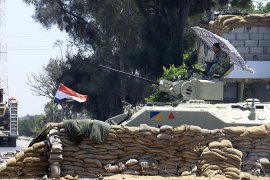