Riad Hijab, Syria’s defected prime minister, has said that President Bashar al-Assad’s government is near collapse and urged other political and military leaders to tip the scales and join the rebel side.

“The regime is on the verge of collapse morally and economically,” Hijab told a news conference in the Jordanian capital, Amman, on Tuesday in his first public comments since leaving his post last week.

Hijab, who fled to neighbouring Jordan with his family, is the highest-ranking political figure to defect from Assad’s regime.

He said he was now backing the rebels, but gave no clue as to his plans. He said, however, that he did not “intend to take any office, now or in the future”.

“I urge the army to follow the example of Egypt’s and Tunisia’s armies [and] take the side of people,” he said.

The former Syrian official said he felt “pain in his soul” over the government’s shelling and other attacks on rebel strongholds as the government stepped up its military offensive.

More than 20,000 people have been killed in the unrest since March 2011, according to opposition activists.

“I was powerless to stop the injustice,” Hijab said, speaking in front of the flag used by the opposition.

He added: “Syria is full of honourable officials and military leaders who are waiting for the chance to join the revolution.”

The United States on Tuesday lifted sanctions against Hijab, and urged more top officials to abandon the regime.

In a move aimed at convincing members of the inner circle of Assad that they have not been permanently blacklisted, the US Treasury Department unfroze Hijab’s assets.

“This action is being taken because Hijab is no longer a senior official of the government of Syria,” the Treasury said in a statement.

“The United States encourages other officials within the Syrian government, in both the political and military ranks, to take similarly courageous steps to reject the Assad regime and stand with the Syrian people,” Treasury official David Cohen said. 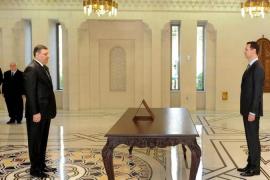 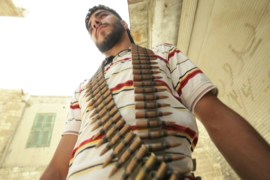 Locals in Aleppo have kept distance from rebels fighting for control of country’s largest city. 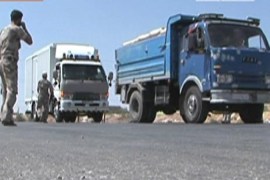