Rescue teams have stopped looking for survivors from two powerful earthquakes near northwestern city of Tabriz, state television said, adding all those trapped under the rubble had been located and saved.

At least 227 people have been killed and more than 2,000 wounded in the massive earthquakes that hit the towns of Ahar and Varzaghan on Saturday. Iran’s Fars News Agency reports the number of dead to be 300.

“There are no people left to recover from under the rubble in any village, and all necessary aid is currently being distributed,” an interior ministry official in charge of disaster management, Hossein Ghadami, told state television on Sunday.

Efforts are on to provide water and shelter to the affected people, as thousands of people huddled in makeshift camps or slept in streets after Saturday’s quakes in fear of more aftershocks.

Officials said on Sunday that emergency shelters were distributed on Sunday and a field hospital was set up in Varzaghan, one of the hardest hit towns 60km from Tabriz, to treat the injured.

In an interview with a freelance journalist, Abbas Fallah, a parliamentary representative for Ahar and nearby Heris, pleaded for help.

Emphasising that Ahar and Heris were not hard to reach, Fallah begged listeners to bring supplies – tents, dried food, hot food and mineral water – themselves rather than leaving it to any organisation to do so.

Overcrowded hospitals struggled to cope with thousands of victims. Hospitals in Tabriz, Ardabil and other cities nearby took in many of the injured, residents and Iranian media said, and there were long queues of survivors waiting to be treated.

Pouya Hiajain, spokersperson, Red Crescent Society of Iran, said: “There are about 133 villages that have been damaged, 92 groups from Red Cross society are actually there, and there is presence of over 100 ambulances. Also air force is providing about six helicopters.”

“Also 5,000 tents have been set up, items like food and equipment and blankets have been distributed,” he said.

“Some countries like Turkey, Pakistan and Taiwan have given us sympathy, but currently there is no need for help from international community,” Hiajain told Al Jazeera.

The National Iranian American Council has reached out to the White House, US state and treasury departments, seeking a “general license to be issued to exempt relief efforts from current US sanctions. The US government, the group said in a statement, is “actively looking into and preparing for the most appropriate response”.

With telephone communications disrupted in the disaster zone, emergency teams relied on radios and travelled in person to hard-hit villages to rescue and assess the destruction.

The earthquakes, which struck on Saturday within 11 minutes of each other, measured 6.2 and 6.0, according to Tehran University’s Seismological Centre.

The US Geological Survey, which monitors seismic activity worldwide, ranked them as more powerful, at 6.4 and 6.3 on the moment magnitude scale, respectively.

Iran’s Mehr news agency reported that injured victims of the earthquakes face a shortage of several blood types and called on people to donate blood at designated centres.

It also reported that there was a shortage of tents and food supplies in the disaster-struck region.

It also provided 3,000 tents, blankets and tonnes of food – all a sign of years of preparedness in a nation prone to sometimes catastrophic seismic activity.

President Mahmoud Ahmadinejad’s office posted a statement on its website expressing condolences to those in the disaster zone and calling on authorities to “mobilise all efforts to help the affected populations”.

Villages outlying the towns of Ahar and Varzaghan, 60km from Tabriz, were decimated, being closest to the epicentres of the two quakes.

Ghanbar Naderi, a Tehran-based journalist, told Al Jazeera that the majority of the villages near Varzaghan have been almost entirely destroyed.

“There are 537 villages in east Azerbaijan province. Of these, based on the latest figures, 250 villages have been damaged,” said Naderi. Adding that the main challenge for health officials is starting the process of burying the dead.

“This hasn’t happened, but I think as of tomorrow morning, they will start to do just that.”

Dwellings close to Heris, another town nearby, were also badly shaken.

The second, a big aftershock, rumbled through from nearly the same spot.

A series of more than 17 smaller aftershocks rating 4.7 or less rapidly followed.

Naderi earlier said that the earthquakes had created concern in the city “because the capital sits on three major faultlines and the last earthquake killed thousands of people”.

The deadliest was a 6.6-magnitude quake which struck the southern city of Bam in December 2003, killing about 30,000 people and destroying the city’s ancient mud-built citadel. A magnitude 6.3 quake also hit the southeastern province of Kerman in 2010. 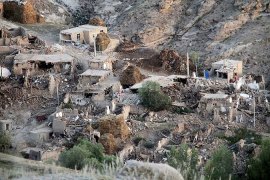