Khalil Saie, the head of the regional natural disasters centre, told state television that the death toll could rise.

Earlier Saie urged residents in the zone not to panic, reassuring them that “help is arriving and rescuers are already at the scene”.

Up to now, there are no deaths reported in the cities and all the victims come from rural areas,” he said.

The scale of the disaster was still emerging as rescue operations in the devastated zone northeast of the city of Tabriz pushed through the night after Saturday’s quakes.

Earlier, Gholamreza Masoumi, the country’s head of emergency services said that the injured were being taken to Tabriz, the biggest city in the region, and Ardebil, a neighouring province.

Panicked residents fled their homes after the earthquakes on Saturday, which the US Geological Survey (USGS) ranked at 6.4 and 6.3 on the Richter scale.

Tehran University’s Seismological Centre said the first earthquake hit at 4:53pm local time (12:23 GMT), with an epicentre just 60km from Tabriz, close to the town of Ahar, and a depth of 10km.

The second – a big aftershock – hit 11 minutes later from nearly the same spot. A series of 11 smaller aftershocks rating 4.7 or below rapidly followed.

“We are asking people to not panic,” Saie said. “Help is arriving and rescuers are already at the scene.”

President Mahmoud Ahmadinejad’s office posted a statement on its website expressing condolences to those in the disaster zone and calling on authorities to “mobilise all efforts to help the affected populations”.

Officials had to use radios because of disrupted telephone communications in the region and dispatched helicopters to remote villages.

An emergency services official said 66 rescue teams were at work, using 40 devices and seven dog squads to detect buried survivors. He said 185 ambulances had been sent to the area.

Those hurt were taken to hospitals in Tabriz and Ardebil, the two biggest nearby cities, both of which escaped relatively unscathed by the earthquakes.

The towns of Ahar and Varzeghan, 60km from Tabriz, were the hardest hit, being closest to the epicentres of the two quakes. Haris, another town close by, was also badly shaken. Scores of villages were decimated.

Ahmad Alireza Beigi, the regional governor, told state television that while the city of Tabriz was relatively free of major damage, he was more concerned about the surrounding villages.

“Sixty villages… have been heavily damaged and are in need of help,” Abbas Fallah, a lawmaker in the hard-hit town of Ahar, told the semi-official Mehr news agency.

Lawmaker Abbas Falah said people in the region are in need of bread, tents and drinking water.

“So far 73 bodies from Varzaghan and Ahar have been handed over to the coroner’s office,” IRNA quoted Bahram Samadirad, a provincial official from the office, as saying.

“Since some people are in a critical condition and rescue workers are still trying to rescue people from under the rubble, unfortunately it is possible for the number of casualties to rise.”

Tabriz is a major city and trading hub far from Iran’s oil producing areas. Though buildings in the city are substantially built, homes and businesses in Iranian villages are often made of concrete blocks or mud brick that can crumble and collapse in a strong quake.

A local provincial official urged people in the region to stay outdoors during the night for fear of aftershocks, according to IRNA.

The deadliest recent tremor in Iran was a 6.6-magnitude quake which struck the southern city of Bam in December 2003, killing 31,000 people – about a quarter of the population – and destroying the city’s ancient mud-built citadel.

Ghanbar Naderi, a Tehran-based journalist, told Al Jazeera that the earthquakes had created concern in the capital.

“These particular earthquakes have created a lot of concern in the Iranian capital, Tehran. Because the capital sits on three major faultlines and the last earthquake killed thousands of people,” he said.

“We don’t know when the next earthquake is going to hit the capital Tehran, and unfortunately some of the houses just like the houses in East Azerbaijan … are not built based on standard requirements and they don’t follow housing codes.”

Gavin Hayes, a research geophysicist at the USGS, said that aftershocks were likely.

“It’s a region that is fairly prone to earthquakes. It’s had a long history of events, it’s not far from plate boundaries in the region. It’s just about 300km away from an earthquake that happened in eastern Turkey in October of last year that killed upwards of 500 people. So it’s a region that’s very familiar with these events, unfortunately,” he told Al Jazeera. 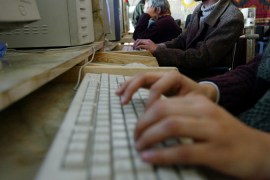 Security companies say targets in the Middle East are victims of unknown cyber hackers who communicate in Farsi.