Video has emerged from Syria which appears to show rebels executing regime loyalists in Aleppo.

The men, allegedly members of the shabiha, armed groups who have assisted in the government’s crackdown, are lined up and shot at point blank range.

The narrator in the video, uploaded to YouTube, says the men are from the Barri clan, whom the rebels accuse of murder. 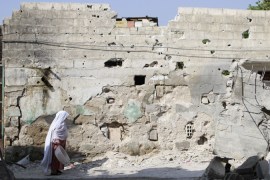 Zeino al-Barri, a politician from a Sunni clan loyal to Syria’s President, is killed publicly in Aleppo.