DR Congo rebels have retreated from the strategic town of Rutshuru in North Kivu province, a day after taking it from government forces without a fight, rebels and the United Nations say.

Congo’s UN peacekeeping mission, MONUSCO, said M23 fighters on Monday had pulled out of Rutshuru as well as the town of Kiwanja and the village of Rubare, also taken by the rebels on Sunday.

“[The rebels] abandoned their positions in town and moved to the surrounding mountains,” Rutshuru resident Lucien Amoli said.

An M23 statement warned the army against returning to the towns, saying any attempt to do so would be “immediately and energetically repressed” by the fighters.

The rebels withdrew into the mountain gorilla haven of Virunga National Park, where an official said heavy bombing was preventing rangers from protecting the critically endangered primates.

The movement take its name from a March 2009 peace deal that ended a previous rebellion in North Kivu and led to the rebels’ integration into the national army. They deserted the government ranks earlier this year, accusing the government of not respecting the agreement.

Rebel leader Sultani Makenga said they were retreating from Rutshuru as they waited to hear if the government was ready to negotiate their demands over the March 23, 2009 peace deal.

Since fighting started in May, more than 30,000 Congolese have registered as refugees in Uganda, while thousands more are yet to be officially  listed, government officials said.

Thousands of others fled into Rwanda, further south.

The recent gains for the rebel movement in North Kivu province have raised fears that the country could be dragged back into war.

They also threaten to further damage relations with Rwanda, which has denied allegations by Congolese authorities and a panel of UN investigators that it is supporting the rebels.

Makenga told reporters on Sunday, hours after the M23 took Rutshuru, that they planned to leave all the towns they had taken except Bunagana, a strategic mineral trading post at the border with Uganda.

“The government is going to determine if they want peace. And if they want the combat to end,” Makenga told reporters in Rutshuru. “If the military wants to keep fighting us, we will pursue them.”

President Joseph Kabila’s government has given no indication that it is ready for talks, even as its soldiers flee before the rebels.

At the weekend, when Uganda announced more than 500 Congolese soldiers had crossed the border, Kabila’s government announced that Makenga and 13 other officers were cashiered from the army and that it was seizing all their assets.

The conflict in east DR Congo is a spillover from Rwanda’s 1994 genocide.

Hundreds who participated in the killings of some 800,000 Tutsis and moderate Hutus escaped into Congo and still fight there today.

The M23 rebels are the latest incarnation of a group of Congolese Tutsi rebels set up to fight the Rwandan Hutu rebels in Congo.

At their most successful, the rebels reached the gates of Goma in 2009, when Kabila’s government capitulated by reaching a rapprochement that allowed the rebels to be integrated into Congo’s army and troops from neighbouring Rwanda to deploy in Congo to fight the Rwandan rebels.

This time round, they are believed to number only a few hundred, enough to take urban areas but not enough to hold them. 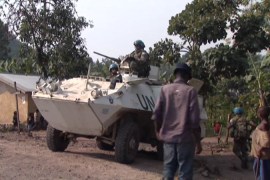 Al Jazeera gains exclusive access to UN forces backing up the Congolese army in the battle for strategic Bunagana town. 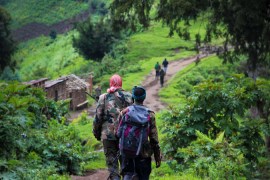 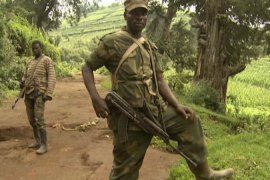 Group of rebel defectors say they were recruited and trained in Rwanda, then sent to fight in Congo against their will. 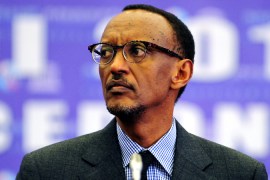