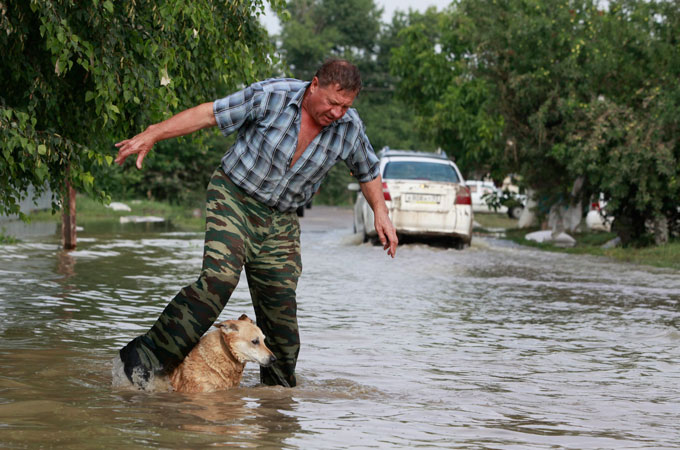 A man and his dog wade to safety. [Reuters]

The flooding which killed at least 144 people in the southern Russian region of Krasnodar once again shows how vulnerable our urban areas can be to extreme rainfall.

Although there have been rumours of an upstream dam being opened, there is no doubt that a massive storm system developed in the area during the course of Friday evening.

Reports of 280mm of rain are hard to confirm, as many weather stations in the region reported relatively small amounts of rain. This illustrates just how localized such storms can be.

Nevertheless, 280mm in the space of a few hours is exceptional. The average rainfall for the nearby city of Sochi for the whole of July is just 60mm. So what could have produced such torrential rain?

Satellite imagery would suggest a massive thunderstorm, known as a supercell, was responsible. In ordinary thunderstorms the energy from rising air tends to get cut off by cool descending downdraughts.

Supercells have updraughts and downdraughts in different parts of the cloud. Hence they can continue to grow and the rainfall can be of almost biblical proportions.

Certainly the ingredients for a supercell were present: high temperatures as a result of the heatwave across southeast Europe; warm water in the Black Sea and a displaced jet stream in the upper atmosphere.

The potential for disaster was evident from the flash floods which hit the nearby Turkish port of Samsun last week in which nine people died.

In both cases torrential rainfall seems to have overwhelmed the local rivers, the Mert  in Samsun and the Kuban at Krasnodar.

Whilst investigations will inevitably follow both tragic events, the problem of how robust river defenses should be to withstand once-in-a-lifetime events is one which is faced by many of the world’s coastal towns and cities.