Six west African leaders have called for the International Criminal Court (ICC) to investigate “war crimes” in northern
Mali, in a statement issued at the end of a summit on the crisis there.

Over the past week, armed Islamist fighters have descended on cemeteries holding the remains of Timbuktu’s Sufi saints, systematically destroying its six most famous tombs, in actions decribed by the ICC as possible war crimes.

“They are asking the International Criminal Court to proceed with necessary investigations to identify those responsible for war crimes and to take the necessary action against them,” the statement from the regional Economic Community of West African States (ECOWAS) said.

The appeal came after Burkina Faso’s President Blaise Compaore, the top mediator for ECOWAS, and five other leaders, met in Ouagadougou, the capital of Burkina Faso, with several Malian leaders, though not the country’s transitional president or prime minister.

Interim president Dioncounda Traore, who has been receiving medical care in Paris since being attacked in his office in May, while no reason was given for the absence of Cheikh Modibo Diarra, the prime minister.

ECOWAS also called on Mali to request a UN-backed military intervention in order to try to win back the country’s north, which has been overrun by Ansar Dine and MUJAO, radical Islamic groups linked to al-Qaeda.

The group of west African nations also called on Mali to put in place by July 31 a “national unity government” that could put an end to the months-long crisis, following a coup in the capital Bamako.

Malian influence holders should draw up plans to “implement a roadmap to end the crisis,” the statement said.

An official in Mali’s national assembly said on Thursday that Traore’s decision not to attend the Ouagadougou talks had less to do with his condition than with perceptions in his home country, where he has not returned since the incident.

Renegade soldiers overthrew the elected president on March 22 but, under intense regional and international pressure, later agreed to hand power back to a civilian administration.

Traore was attacked by a group of people who had backed the coup.

‘Protectors of the Faith’

The ICC has described the destruction of Timbuktu’s heritage over the past week by Ansar Dine, who believe the tombs are not consistent with Islamic law, as a possible war crime.

Ansar Dine, or “Protectors of the Faith”, seized control of Timbuktu last week, after ousting the Tuareg rebel faction that had invaded northern Mali alongside Ansar Dine’s soldiers three months ago.

UNESCO, the UN cultural agency, has called for an immediate halt to the destruction of the sacred tombs.

Irina Bokova, who heads UNESCO, reported in a statement issued on Saturday that the centuries-old mausoleums of Sidi Mahmoud, Sidi Moctar and Alpha Moya had been destroyed.

Last week, meeting in St Petersburg in Russia, UNESCO’s World Heritage Committee had placed the mausoleums on its list of sites in danger due to the attacks, UNESCO spokesman Rony Amelan, said.

On Sunday, during a stop in Senegal, Fatou Bensouda, prosecutor for the ICC, said that the destruction of the city’s patrimony constitutes “a possible war crime”, according to private radio station RFM.

Reached by telephone in an undisclosed location in northern Mali on Saturday, a spokesman for Ansar Dine said it did not recognise either the UN or the ICC. 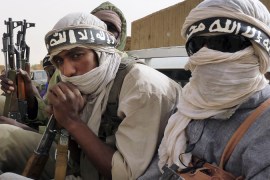 Security Council calls for sanctions against fighters in north and says razing of shrines could lead to ICC charges.

Thousands gather in capital Bamako to protest rebels’ takeover of the northern region. 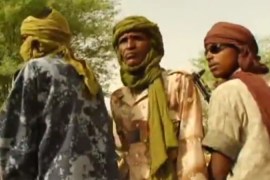 With area disconnected from central rule, Tuareg rebels have been expelled from their self-declared homeland.